Leave it to Banff Mountain Film Festival: When it comes to capturing the most spectacular cinematography in the world of action sports, it’s tough to beat its lineup.

Thanks to the committed work of local community members, Sandpoint gets to share in every frame of adrenaline-pumping action. The 2016 Banff Mountain Film Festival’s Radical Reels tour is coming to the Panida Theater, with a showing set for 7:30 p.m. Friday, Oct. 7. This selection of high-energy sports and outdoor adventure short films will be sure to have you jonesing for another season of winter sports—or maybe thinking fondly of your dearly departed summer.

The touring short film series, now in its 13th year in Sandpoint, is a selection of the best action sports films screened at the annual Banff Mountain Film Festival. This year’s selection of short films will take you across the world, jumping from mountain bikers testing their skills in Namibia to a traditional climber tackling her biggest challenge yet on El Capitan’s legendary Golden Gate in Yosemite. All in all, audiences will encounter 11 short movies, each with their own unique personalities, settings and adventures. 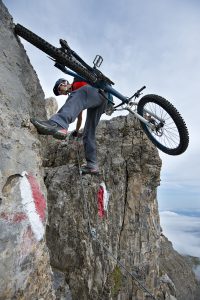 Throughout the worldwide journey, viewers will meet fascinating characters driven by a thirst for adventure or a desire to push themselves to their limits. In “Rey del Rio,” the world’s best kayakers test their skills by challenging the massive waterfalls of Mexico. “Degrees North” follows renowned snowboarder Xavier De Le Lue’s search for the most amazing powder in the Northern Hemisphere, taking to the sky on a paraglider for a bird’s eye view of the mountains.

Sandpoint plays host each year to the Banff Mountain Film Festival World Tour, a film series similarly global in scope. However, action sports films became so popular for the festival that officials devised the Radical Reels tour, a highlight of the year’s top selections. As Sandpoint had proven itself a valuable partner for the World Tour film series—thanks in large part to local partner and event organizer Michael Boge—the town was selected as one of six sites worldwide to host the initial Radical Reels program.

You can be sure that everyone who attends the screening will walk away with their own pick for best movie of the series. On the other hand, just about everyone will share an awe of the natural world’s beauty and an enthusiasm to experience it in all its glory.

Check out the Banff Mountain Film Festival Radical Reels Tour on Friday, Oct. 7, at the Panida Theater. The show starts at 7:30 p.m. with doors opening at 6:30 p.m. Tickets are available in advance at Eichardt’s, the Alpine Shop, the Outdoor Experience and Burger Express in Sandpoint or at Zip’s Drive-In in Bonners Ferry. If any tickets remain, they will be sold at the door on the night of the show.