Scott Rhodes, a former Sandpoint resident and last known to be living in Libby, Mont., has been fined almost $10 million by the Federal Communications Commission for a yearslong campaign consisting of thousands of racist, homophobic and otherwise threatening robocalls targeting a number of individuals and communities around the country —  including Sandpoint Reader Publisher Ben Olson.

The FCC announced the $9.918 million fine in a news release Jan. 14, making formal its initial claim against Rhodes filed in January 2020, which totaled $13 million. His offense: “illegally using caller ID spoofing with the intent to cause harm.”

According to the commission’s statement: “This individual made thousands of spoofed robocalls targeting specific communities with harmful pre-recorded messages. The robocalls included xenophobic fearmongering (including to a victim’s family), racist attacks on political candidates, an apparent attempt to influence the jury in a domestic terrorism case and threatening language toward a local journalist.” 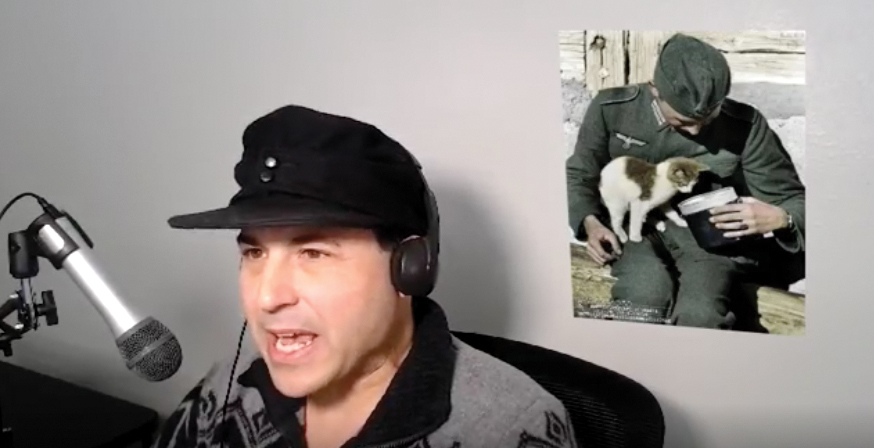 A screenshot of former Sandpoint resident Scott Rhodes on his racist podcast, which has been dormant since April 2020.

The “local journalist” in question was Olson, whose reporting alongside former Reader Editor-in-Chief Cameron Rasmusson revealed Rhodes as the individual behind the distribution of racist CD’s at Sandpoint High School in late-2017. Subsequent news stories by Olson and Rasmusson identified Rhodes as the individual on a video podcast series linked to racist robocalls received in California, which then led to national news outlets reporting his identity. That prompted a sustained effort to defame Olson and the Reader, as well as targeting multiple individuals around the country.

Following that reporting, Rhodes’ landlord evicted him from his home in Sandpoint in October 2018. Rhodes then made Olson, the Reader and its advertisers a continual target, with incidents of telephonic harassment continuing into early 2020, at which point he received notice that he would face a hefty fine from federal officials.

“The law is clear: Spoofed caller ID robocalls used with the intent to defraud, cause harm or cheat recipients is unlawful. And the American people are sick and tired of it,” wrote FCC Chairman Ajit Pai in the Jan. 14 statement. “In this instance, not only were the calls unlawful, but the caller took them to new levels of egregiousness. With today’s fine, we once again make clear our commitment to aggressively go after those who are unlawfully bombarding the American people with spoofed robocalls.”

Rhodes targeted numerous communities, keying into local controversies and hot-button issues that ostensibly served to elevate his “brand” among other avowed right-wing, racist, homophobic and assorted extremist groups, according to the 19-page Forfeiture Order filed by the commission. Among them, the FCC highlighted the case in Iowa, where Rhodes “spoofed a local number to robocall residents of the town of Brooklyn and surrounding areas with xenophobic messages referring to the arrest of an illegal alien for the murder of a local college student.”

The commission also noted illegal robocalls in Virginia, where “[Rhodes] made spoofed robocalls to residents of Charlottesville based on a false conspiracy theory in an apparent attempt to influence the jury in the murder trial of James Fields, prompting the judge to explicitly instruct the jury pool to ignore the calls. In Florida and Georgia, he made spoofed robocalls attacking gubernatorial candidates.”

Those are only a few of Rhodes’ many targets, but he reserved special vitriol for Olson and the Reader.

“In Idaho, he robocalled residents of the city of Sandpoint, attacking the local newspaper and its publisher after they reported the identity of the caller,” the FCC wrote, adding in its Forfeiture Order, “Rhodes does not refute that the robocalls advocated harm to Mr. Olson or the paper. In fact, his response expressed continued animosity toward the paper and Mr. Olson.”

In September 2018 alone, the FCC logged 750 robocalls by Rhodes attacking Olson and Reader in general.

“I am pleased to see that the FCC has held this individual accountable for the vile robocalls that advocated harm both to the Sandpoint Reader and me personally,” Olson stated. “Because the Reader was the first newspaper to identify Scott Rhodes in print, we were repeatedly targeted, harassed, threatened and defamed for more than three years, which included robocalls, anonymous defamatory letters and intimidating videos.

“Our advertisers were also repeatedly threatened and harassed, showing a clear effort by Rhodes to harm our business — a position that has now been corroborated by the FCC,” he added. “The Sandpoint Reader will never be intimidated and we will always stand up to racism and threatening behavior. We are glad Rhodes is no longer part of this community. Hate has no place in Idaho.”

Rhodes is held accountable under the Truth in Caller ID Act, which forbids manipulating caller ID information with the intent to defraud, cause harm or wrongfully obtain anything of value. The FCC heard his arguments against the January 2020 Notice of Apparent Liability, but found “most of them unpersuasive.” Yet, because some of his many robocalls targeting a California primary campaign were in fact the caller’s to use, the commission ruled to reduce his fine from its initial $13 million.

Rhodes has 30 days to pay the fine. If he fails to do so, the matter will move to the U.S. Department of Justice for further action. What the “further action” may be remains to be seen — neither U.S. Code nor an FCC spokesman provided details as of press time.