The CDs, which contained white supremacist, anti-Semitic and otherwise racist images and messages, echo previous distribution campaigns of racist content over the past year. Past campaigns used mailings or flyers thrown into neighborhood homes in the dead of night and featured racist images and text, promoted a racist website and targeted local activists, journalists and politicians, including Sandpoint Mayor Shelby Rognstad. 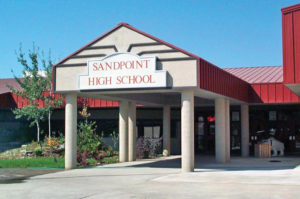 SHS student newspaper the Cedar Post broke the story of the CD distribution. SHS student and Cedar Post Editor-in-Chief McCalee Cain first heard about the CDs when a couple of Cedar Post staffers approached her with the material. She said they went through the disc’s contents on a computer together, and upon realizing it was a breaking story, she used the rest of her school day to find answers from school staff about what would happen next.

“At the time I was thinking there were like five (CDs), but in the end it turns out there were a lot,” she said, noting that SHS administrators were quick to confiscate as many as they could from the parking lot. “I’m not sure how many students actually watched them, which is good.”

Cain was interviewed by KXLY 4 News following her breaking of the story, which she said she didn’t anticipate.

“I was saddened by the reason I was writing it, but … it really didn’t feel like a big deal to me until after the fact because I’m a reporter. That’s what I do,” she said, adding that after writing the story she continued on as usual, heading off to take photos at a basketball game.

“This kind of propaganda has gotten people upset in Sandpoint, and that’s what the people spreading it are going for, so I’m disappointed but not surprised,” Cain said.

According to the police report of the SHS incident, Sandpoint Police School Resource Officer Spencer Smith learned from a student on Thursday that CDs were being placed on vehicles in the school parking lot. Upon investigating, Smith found 56 CDs in total, red and black in color and placed in protective sleeves. Each was labeled with the title, “What They Are Hiding From You” and promoted a website.

Smith later reviewed security camera footage and saw the person responsible drove into the parking lot in a red Jeep, placed the CDs on parked cars and drove away.

According to the police report, officers identified a man named Scott Rhodes as a person of interest in the incident. He denied any involvement in the case.

“He requested all other questions go through his lawyer,” the police report reads.

Nevertheless, police issued a no-trespass order against Rhodes, prohibiting him from setting foot on school grounds for a year. This came at the request of Lake Pend Oreille School District Superintendent Shawn Woodward, who said that the distribution of the CDs violated school board policy #4140.

“The school district has submitted a no trespass order to the Sandpoint Police Department,” Woodward said in an email. “If this person chose to ignore (the) order and trespassed, then the police would have cause to make an arrest.”