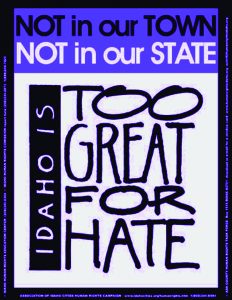 The fliers, which promote one of the most widely trafficked white supremacist websites on the internet,  feature racist caricatures of Jewish, Latino and black people and call for residents to “keep Idaho white.” For many of the Sandpoint families canvassed, it was a disturbing experience.

“We were shocked and upset, and it doesn’t make me feel better about the political climate as well,” said Angela Henney, whose home received one of the fliers.

According to Henney, the flier was packaged in a plastic sleeve and included a two-by-two-inch tile, which made it easier to be thrown from a vehicle. Henney discovered it when she and her daughters left to meet family for breakfast. When her daughters asked why she was upset, she had to explain the fliers’ message.

“I just had to explain to my daughter what they meant and that it was what some people believe, but it’s not what we believe,” she said.

“My oldest daughter said, ‘I didn’t know people could think that way,’” she added.

According to Sandpoint Police Chief Corey Coon, around 30 copies were turned into the authorities. However, untold numbers of additional copies were either thrown away or not reported.

Coon said there are no suspects as yet. The flier distribution likely also falls under free speech protections unless evidence emerges that some kind of targeted harassment was involved.

“In this case, I’m not sure if they’re targeting any one person,” he said. “There might be some other criminal charges a prosecutor might look into.”

The distribution likely took place late Saturday night or early Sunday morning, making it more difficult to know who is responsible. Based on similar episodes, Coon suspects the distributors were not Sandpoint residents.

For Lynn Bridges, president of the Bonner County Human Rights Task Force, the fliers are an uncomfortable echo of Sandpoint’s past battles with white supremacists seeking a foothold in the community.

“Unfortunately Sandpoint and Bonner County have been down this road before,” she said. “Our community has shown over and over that they do not tolerate hate groups. The group listed on the hate fliers that were distributed to various homes over the weekend have been identified as a Neo-Nazi hate group by the Southern Poverty Law Center.”

Bridges invites community members concerned by the incident to attend the workshop “Building Values Bridges: Looking For Common Ground.” Scheduled for 3-4:30 p.m. Saturday, March 25, at the Forrest Bird Charter School, the event provides training “with concrete and practical ideas of how to build common ground with others of differing viewpoints.” Bridges also said the task force has published an “Idaho is too great for hate” poster on its Facebook page and welcomes anyone who wishes to download and display it. Finally, residents can report incidents to the Southern Poverty Law Center.

“We would like to remind the community that the strength of human rights in Bonner County is shown not by reacting violently to hate, but by moving beyond it and creating solidarity and support for all,” Bridges said.