Putting art on a pedestal

After a review of more than 20 submissions, the Sandpoint Arts Commission on July 8 settled on three sculpture designs for installation in the Silver Box Art on Loan Program. The preferred pieces include “Angry Bird,” by Sandpoint artist George Rickert; “Okeefe 5,” by Pine Valley, Utah artist Patrick Sullivan; and “Phoenix Rising,” from artist Alex Romero, of Post Falls. 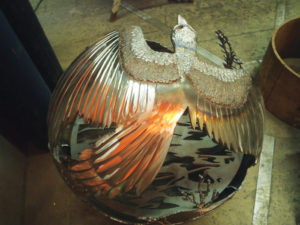 The Silver Box Art Project features three sculptures to be displayed atop metal pedestals across from Farmin Park at Oak Street and Fourth Avenue, near the Post Office on Church Street and the northwest corner of Oak Street and Fifth Avenue. Selected artists will grant their work to the city for approximately one year and receive an honorarium of $1,000. Should an artist’s piece sell as a result of its exhibition in the program, the city will receive a 10% commission of the sale price.

The city is under no obligation to purchase any of the pieces and will rotate featured artwork each year.

Arts commission members’ recommendations came after a lengthy process of review and a roundtable jury session during which they weighed the merits of each piece. “Angry Bird,” a fantastically-colored, abstract carving in solid locust log, which measures about 50 inches by 23 inches, garnered enthusiastic responses from the commission.

“It’s very kitschy, very silly, and I think it would engage a lot of people’s interest,” said commission member Barry Burgess. “I like the fact that he’s local, too.”

“Okeefe 5” is a three-foot-tall pillar of silvery-grey carrera marble, which caught the commission’s eye for its variable textures.

“I love the more organic side, versus the more structural side,” said commission member Matt Kerr. 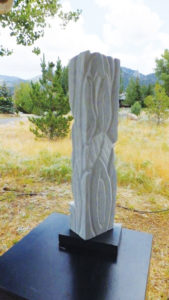 “Phoenix Rising,” a circular steel sculpture 30 inches in diameter featuring the iconic Phoenix bird in flight over a landscape wrought in metal, appealed to the commission because of its representational, rather than abstract, forms. While Burgess was less keen on the representational aspect, he liked the spherical shape, patterns, light reflection and potential to cast interesting shadows. Commission member Patricia Walker voted in favor of the piece “because it invited intrigue, to me.”

The commission recommended installing “Angry Bird” on the pedestal near the Post Office, “Okeefe 5” at the Fifth Avenue location and “Phoenix Rising” at Oak and Fourth, where its circular shape might play off the rounded design of the nearby fountain.

The recommendations now go to the Sandpoint City Council, which will likely review the options at its August 7 meeting.