In praise of Asian monarchs: past and present

But watch our for those errant crown princes

In late May 1992, against the advice of the State Department, I travelled to Thailand for a two-week visit.  There had been a military coup the previous year, and on May 17, an estimated 200,000 Thais gathered in Bangkok to protest the rule of Gen. Suchinda Kraprayoon. He called out his troops, and thanks to U.S.-supplied M-16 rifles, 52 protesters were killed and hundreds more wounded. 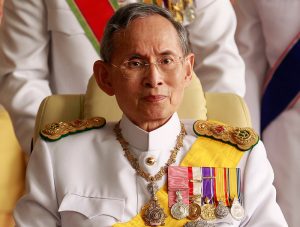 Just before I landed at the Bangkok airport, I learned that King Bhumibol Adulyadej had met with Suchinda and opposition leader Chamlong Srimuang, and the king persuaded the general to give up power.

The king’s name means “Strength of the land, incomparable power,” and for 70 years the Thai people have adored and respected him as a Bodhisattva, a “Being of Enlightenment.” He died on Oct. 1, and millions of Thais openly grieved the loss of their great monarch.

Sitting above the tumult of Thai politics (12 successful military coups since 1932), King Bhumibol had always been able to bring the various factions together. Over the decades he gained the respect of his people by traveling among them and seeing to their needs.

Sadly, the military has once again taken over, but this time the king made the mistake of siding with one side in the power struggle.  Most Thais loved him so much that they were willing to forgive him for this break from tradition.

Now the Thais’ main concern is that Crown Prince Maha Vajralongkorn, a playboy thrice married, is seen by many unfit to rule. His sister, Princess Maha Sirindhorn, is well-loved, and could, under a law passed in 1978, become Thailand’s first queen.  After some hesitation on his part, the controversial prince will now ascend the throne on Dec. 1.

The Shah dynasty of Nepal had ruled since 1768 and was highly respected. When I visited there in 1992, I saw thousands of Nepalis standing in line to receive a personal blessing from King Birendra.

On June 1, 2001, King Birendra and nine members of the royal family were murdered by Crown Prince Dipendra in a drug-fueled rage. Gyanendra, the surviving younger brother, ascended to the throne, and his first act was to suspend the Parliament and shut down the press.  A massive Gandhi-style movement forced Gyanendra to back down, and in 2008 the monarchy was abolished.

The small Himalayan state of Bhutan used to be ruled by a violent and corrupt Buddhist lama. In 1907, at the urging of the British, Bhutan welcomed its first king, Ugyen Wangchuck, and he founded one of history’s most enlightened dynasties. When I traveled to Bhutan in 1999, Harvard educated Jigme Wangchuck was celebrating his Silver Jubilee and confirming the tradition of righteous Dharma Kings.

The Bhutan is a poor country but its people have universal education and health care. They like to say that their goal is not Gross National Product, but Gross National Happiness, which I experienced first-hand as I toured the country.

Acting as a beneficent philosopher king, Jigme Wangchuck banned plastic bags and the import of highly polluting motorcycle taxis from India. He has decreed that timber exports would cease, and in contrast to neighboring Nepal, the Bhutanese landscape is verdant and unblemished.  Taking seriously the Buddhist belief that the Himalayas are mountain goddesses, the king banned mountaineering while allowing trekking in the foothills.

Kirti Shri, one of Buddhist Sri Lanka’s best kings, was actually a practicing Hindu. He gave lavish support to Buddhist art, monasteries, and temple building. Ethnic and religious harmony was the norm for centuries, but now, without a mediating royal presence, Buddhist militants have attacked minority Muslims and Christians.

For centuries Burmese kings successfully ruled the most ethnically diverse country in Asia. In the late 19th century the British took over the country, and they brought in missionaries, Indian civil servants, and Muslim immigrant workers. Centuries of religious harmony between Buddhist and native Muslims was undermined, and now militant Buddhist monks are leading attacks on Muslims in a southeastern state.

In 1706 the Sixth Dalai Lama, known for his sexual escapades, resigned and died under mysterious circumstances. One of the current Dalai Lama’s most amazing confessions has been his opinion that, from that time forward, Tibet would have been better governed by kings rather than high lamas such as himself.

I’m left wondering if the Dalai Lama really believes, even with the less than stellar performance of his predecessors, that it was best not to have had his enlightened leadership in the world.

Nick Gier of Moscow taught religion and philosophy at the University of Idaho for 31 years.