Portugal comes back from the economic brink

Trump boasts about the nation’s economic recovery, but during his first year the economy grew only 2.3 percent. The average for Obama, as he brought the nation out of the Great Recession, was 2.2 percent. 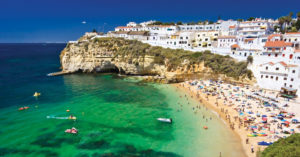 In 2017 growth for those countries on the Euro currency was higher at 2.4 percent with the Czech Republic, the Netherlands, and Spain recording 3.5, 3.2, and 3.1 percent respectively.

The Europeans are not only expanding their economies, they are also reducing their budget deficits, measured as a percentage of the gross domestic product (GDP). The average annual deficit for the Eurozone is now 1 percent, down from 7 percent in 2010. Germany, the Netherlands and the Czech Republic are actually running small budget surpluses.

During his term in office, Obama brought down the U.S. deficit from a high of 10 percent to 3.5 percent. With the Trump tax cuts and insufficient growth, the rate has climbed to 4.6 percent, and $1 trillion deficits are forecast for the years to come.

On May 17, 2016, Trump declared that he was “the king of debt,” so will he be happy to add trillions of dollars to the $21 trillion we now owe? For the first quarter of 2018, the Treasury Department had to borrow a record $488 billion to keep the government running.

I am now traveling in Portugal, which has experienced a remarkable economic recovery. In 1974, the Portuguese, along with the Spaniards and Greeks about the same time, freed themselves from dictatorship, and they have struggled to catch up with the rest of Europe.

All three countries were especially hard hit by the Eurocrisis of 2010, and they were forced to run austerity budgets in return for huge financial bail-outs. Portugal’s share was $92 billion, but it was able to wean itself from international assistance in 2014.

Since 2015, Portugal has been ruled by a leftist government, the first since the end of the dictatorship. Most commentators predicted that the coalition of Socialists, Communists and Greens would crash and burn, but Prime Minister Antonio Costa, son of a Communist poet, has proved the skeptics wrong.

Costa has cut the budget deficit in half, and it is now at 2.1 percent, the lowest in the democratic era. In 2017 the economy grew 2.7 percent, the best in 17 years. Costa has restored pensions and wages that were cut during the financial crisis.

Youth discontent is evident everywhere in the worst graffiti that I’ve ever seen. One statement hit home personally, as I sometimes use the service: “F*** Airbnb. We want to live here.”

Despite falling budget deficits, Portugal’s national debt is still too high at 130 percent of GDP.  As a comparison, Greece is at 170 percent, but Germany stands at 67 percent, and Sweden and Denmark are still lower at 41 and 37 percent respectively. The U.S. debt is 105 percent, and it will rise steadily as slow growth and GOP tax cuts drain revenue away.

According to the 2108 Economic Freedom Index, Portugal ranks six points higher than the U.S. for monetary freedom, and they are equal in business and trade freedom. The U.S. scores higher in all other categories, but this is quite an achievement for a government whose critics charge that it would destroy the economy.

Even though the U.S. spends on average twice as much on health care, its quality is rated lowest among with all industrialized countries. The World Care Index ranks Portugal in 28th place followed by the U.S. in 30th. In 2016, the U.S. spent $9,892 per person on health care, while Portugal paid out only $2,734 for better results, despite the fact that I have seen people smoking everywhere.

At one time Portugal was a member of PIIGS, a derogatory acronym to describe Portugal, Ireland, Italy, Greece, and Spain during the 2010 financial crisis. After its banks recovered, Ireland was first to emerge from near ruin, and now Spain and Portugal are doing well.  Only Italy and Greece remain in the economic doldrums.

Now that I have seen some of Portugal’s beautiful towns and cities, I can see why  Lonely Planet guides place Portugal third as the best travel destination. In 2017 it hosted 17 million visitors, 7 million more than the population.  Equally impressive is that fact that Portugal ranks fifth as a choice for foreigners to retire.

Nick Gier of Moscow taught philosophy at the University of Idaho for 31 years. He can be reached at [email protected]