Columbus Day and the Christian conquest of the world:

“We discovered Columbus, lost on our shores, sick, destitute, and wrapped in rags. We nourished him to health, and the rest is history. He represents the mascot of American colonialism in the Western Hemisphere.”

May 4, 1493, was a day of infamy for the indigenous peoples of the Americas. At the urging of King Ferdinand and Queen Isabella of Spain, Pope Alexander VI confirmed their right to confiscate native peoples’ lands.

Even at this point in time, the Christian conquest of the world had been well under way. Alexander’s papal bull was a continuation of what is now called the Doctrine of Discovery. The irony of “discovering” land where people already flourished is a sad and tragic one. 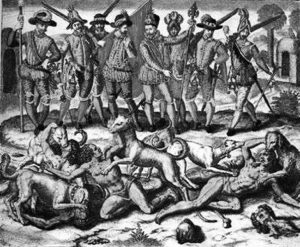 A painting showing Columbus’ use of dogs to hunt down indigenous peoples.

In 1455 Pope Nicholas V exhorted Catholic rulers to conquer, even those “in the remotest parts unknown to us,” all who were enemies of Christ. The Pope gave them permission “to invade, search out, capture, vanquish, and subdue all Saracens [Muslims] and pagans,” take their possessions, and “reduce their persons to perpetual slavery.”

Some priests had disputed Spain’s right of possession, and they had defended the Indians as full human persons. Pope Nicholas acknowledged that native Americans were innocent, peace- loving people, and they greeted Columbus and his men warmly.But after they rescued them from shipwrecked Santa Maria, the Spaniards mistreated them in the most inhumane ways.

One man, Bartolome de las Casas Priests, provided detailed accounts of acts of wanton brutality. The natives were enslaved and worked to death. They were hunted down with dogs, strung up and burned alive. The Taino tribe was reduced from an estimated 1 million to just 500 in 10 years. It was Christian terrorism, pure and simple.

North America’s native population also came under the Doctrine of Discovery. In 1823 Chief Justice John Marshall concluded that the U.S. had derived its right of “dominion” from Great Britain as the nation who “discovered” and settled “unoccupied” land.

As a result, America’s “heathen” natives had lost “their rights to complete sovereignty” and must live as dependent nations within the U.S. The sad story of oppression, massacres and broken treaties is well known and need not be retold here.

Major Christian denominations have denounced the Doctrine of Discovery, but the Vatican has yet to revoke the papal bulls. In November 2013 the nuns from Denver’s Loretto Community sent a letter to Pope Francis requesting that he address this issue.  The sisters praised him and two previous popes for supporting the U.N. Declaration on the Rights of Indigenous Peoples. Francis has also offered forgiveness for “crimes committed against the native peoples during the so-called conquest of America.”

The Loretto sisters have received no response, except from the U.S. Conference of Bishops who thanked them for sending them a copy of the letter. In 2007 Archbishop Celestino Migliore did respond to an earlier inquiry. He wrote that subsequent papal bulls had forbidden the enslavement of Indians and there was “no need to take further action.” Sister Libby Comeaux of the Loretto Community has called this response “fancy footwork in canon law.”

Over the past six decades, six states have taken the lead in honoring America’s indigenous peoples. In 1968 Gov. Ronald Reagan signed a resolution making American Indian Day a state holiday in California. It is held on the fourth Friday of September.

Tennessee also celebrates American Indian Day, but on the fourth Monday of September. Last month, on the same day, Nevada celebrated the holiday for the first time.

On Oct. 10, 2016, recognizing that “the Green Mountain State was founded and built upon lands first inhabited by indigenous people,” Vermont Gov. Peter Shumlin proclaimed that the second Monday in October would now be celebrated as Indigenous People’s Day.

In 1992, the Berkeley, California City Council, was the first city to substitute Indigenous Peoples’ Day for Columbus Day, and since then 31 cities have done the same (four schools and universities have followed suit). Phoenix, Ariz. has been the largest city to acknowledge that Columbus should not be honored for his genocidal attacks on America’s natives.

It is high time for Congress to declare the second Monday in October a national holiday honoring America’s native people. Columbus and his fellow terrorists should be relegated to the trash heap of history.

Nick Gier taught philosophy and religion at the University of Idaho for 31 years.