The coolest, weirdest show you’ll see in Sandpoint this year

Every once in awhile, I’ll hear someone say, “I wish we had some different types of cultural music come through Sandpoint.”

For Pend Oreille Arts Council’s last show of the Performing Arts Series, they couldn’t have picked a cooler, more original performance than DakhaBrakha. 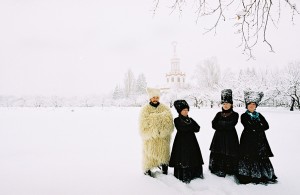 The quartet hailing from Kiev, Ukraine grabs your attention even before they utter a single note. The three women of the band wear these tall wool hats that would make Marge Simpson blue with envy, and the accordion playing male is sometimes pictured in suits with Chewbaccian roots.

It makes me want to check out the Ukraine, if style like this is cool.

Then they start playing, and it seems it’s all you can do to keep your jaw from dropping.

Having experimented with Ukrainian folk music, the band has added rhythms of the surrounding world into their music, creating a bright, unique and unforgettable impression.

The songs feature a mixture of accordion, drums, reeds and shakers, and are propelled by a harmonic blending of vocals that sounds both modern and ancient at the same time.

“People always ask me, ‘What’s your favorite Tiny Desk Concert?’” said producer Bob Boilen. “Well, right now it’s the one recently performed by DakhaBrakha. The creative quartet from Kiev, Ukraine make music that sounds like nothing I’ve ever heard, with strands of everything I’ve ever heard.”

I couldn’t have said it better.

Go to this show, Sandpoint. It’s probably the only time we’ll ever see something this weird and awesome, unless Gogol Bordello happens to come through our area.

DakhaBrakha will be playing the Panida Theater as the final POAC “Performing Arts Series” show on Wednesday, April 27. The show starts at 7:30 p.m. Tickets for adults are $16. POAC members pay $13 and students get in for $11.