Parks of the future

The city of Sandpoint hosted several open houses on the Parks Master Plan ahead of a workshop Jan. 15 at the regular City Council meeting, gathering input on concepts related to three sites included in the plan: City Beach, Downtown Waterfront and the Sports Complex, which comprises Travers, Centennial and Great Northern parks in west Sandpoint. 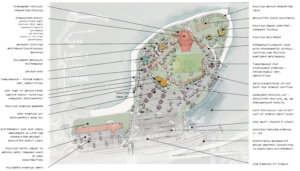 The conceptual plan for City Beach is intended to incorporate a variety of recreational activities, expanded parking and facilitate more events. Image courtesy of the city of Sandpoint/GreenPlay.

Led by Tom Diehl of consultant firm GreenPlay and Parks and Recreation Director Kim Woodroof, the Jan. 15 workshop covered the entire plan, rather than a site-by-site analysis.

“We haven’t made any final decisions; that’s the purpose of this workshop and all of the public engagement meetings we’ve had in the past two days,” Diehl said at the workshop, emphasizing that the plan is intended to inform decisions as far as 50 years into the future — not immediate actions dictated by a five- or 10-year timeframe.

Rather, he shared four high-level goals intended to steer the thrust of the plan and underpin its priorities: providing integrated and comprehensive parks and recreation facilities to the city; supporting and improving recreation programs and services; improving organizational efficiencies; and increasing financial opportunities to fund parks and rec. facilities, services and programs.

The overall plan and conceptual designs are still undergoing revision, with GreenPlay consultants shooting for March or April when they’ll return to the City Council with final draft documents.

Feedback gathered at the open houses, and through a variety of surveys and online public engagement via the city’s opentownhall.com portal, will guide revisions to the concepts — the most high-profile of which, after the Memorial Field plan finalized by council before the new year, has been City Beach.

The concept plan for City Beach emphasizes “more types of recreation, parking and a dedicated event space to promote economic vitality within the downtown core.”

Specifically, the plan calls for an improved boat launch on the Sand Creek side of the park currently home to the Sand-Ida-owned RV park. Securing the land necessary to realign the boat launch to the RV park site would require a land swap with Sand-Ida, which also owns the adjacent Best Western Edgewater Hotel. The swap would transfer the grassy area in front of the hotel from city ownership to Sand-Ida in exchange for the RV park parcel.

That plan has sparked some pushback from residents who argue that the public space in front of the hotel is too valuable to trade away for a boat launch and parking lot. The city and Sand-Ida, meanwhile, have said since summer 2019 that an appraisal of the properties is forthcoming, yet no word on when it will be completed.

City officials and concept planners say the realignment would add more than 130 parking spaces beyond the number of spaces at the existing boat launch, plus make way for a splash pad and larger playground.

What’s more, the City Beach plan identifies a potential home for the Carousel of Smiles adjacent to the existing main parking area.

Other big changes could include a hard surface area roughly equivalent to the size of a professional hockey rink where large-scale events such as a music festival could be hosted. In addition, it’s possible the surface could be equipped with the necessary components to convert it into an ice-skating rink during the winter, “in order to activate City Beach as a year-round destination,” according to planners.

Some aspects of the City Beach concept have come in for pointed questioning, including concerns about loss of green space related to the potential land swap and the assertion that users will be required to pay to park at the beach.

Woodruff argued repeatedly that the city will maintain its waterfront in front of the current hotel site and would actually increase its linear footage of waterfront at the expanded boat launch. What’s more, he said removing the city shop at the beach, shrinking the asphalt behind the snack shack and clearing away some trees in the core of the park will broaden access to green spaces.

Regarding the suggestion that parking would no longer be free, City Administrator Jennifer Stapleton said that was a “misunderstanding.”

“There’s been no discussion about a charge for using the amenities for City Beach and we haven’t even gotten to the point of looking at fees and the analysis for whether there’s a charge for launching a boat or parking a car,” she said.

Envisioning the future of the Sand Creek frontage east of First Avenue, planners have come up with a concept that incorporates a public plaza immediately north of Bridge Street and extending the boardwalk from its current alignment between the Sandpoint Marina and Farmin’s Landing to Bonner General Health.

Running beneath the Cedar Street Bridge, the lengthened boardwalk would feature additional boat tie ups as well as an expanded dock into the creek to create another public gathering place. A section of boardwalk is also envisioned on the opposite bank of Sand Creek, running from the water’s edge at the existing parking area under the bypass and connecting to City Beach.

The Carousel of Smiles could also be sited at the current parking lot on the east side of the creek.

Though some potential commercial and/or private development spaces are included in the plan, the biggest component is improved stormwater management and treatment, as Sand Creek represents the single-largest runoff site from the downtown core.

The concept for the Sports Complex includes a dramatic expansion of the skate park and the tripling of available parking at Travers to accommodate 230 vehicles.

A complex of four new tennis courts relocated from Lakeview Park and City Beach is envisioned immediately north of the Travers parking lot, next to 16 pickleball courts to be constructed in two phases of eight courts each.

Great Northern Park, which city officials stated is in the best condition of any of the city-owned fields, would not receive significant redevelopment in the plan, though improvements to drainage are anticipated there.

“This plan has been a dream of mine for a long, long time and I couldn’t be happier about it,” Woodruff said at the workshop, describing it as “a guiding, living plan.”

Visit opentownhall.com/portals/287/Issue_7920 to see all the conceptual parks plans.