Law enforcement is the face, heart and soul of a community

Several evenings ago my 1957 bride, our visiting and aging (58!) adult daughter, son-in-law and dog Tippy were driving home with cartons of Thai and Japanese takeout from Thai Nigiri. Being about 4 p.m., it was of course dark. I was aware of headlights smack on my tail as I signaled then carefully turned into south Sandpoint from Highway 2. Suddenly there was an explosion of flashing red and blue lights, like a personalized aurora borealis, through the rear window. 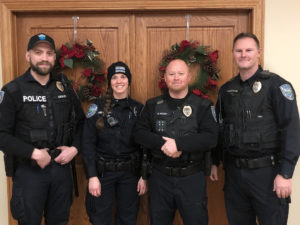 Someone yelled, “Omigod, the police!” as Tippy leaped over the backseat like a gazelle dodging a lion. (The last time I was stopped by a patrol car was June 1956 for racing, angry and frustrated, through a Berkeley, Calif. neighborhood in my British roadster because the coed I loved was on a date with some other dude. I married her anyway).

Unaccustomed to a uniformed authority figure in the dark — even a polite Sandpoint authority figure — requesting by flashlight my registration, drivers license, home address, etc., I almost raised my hands in surrender. My less panic-stricken bride pounded open the glove compartment in the dark and a pile of folders tumbled out.

The officer, probably younger than our grandchildren and just as friendly, smiled, assessed the mess we were making, said “never mind, I’ll get everything I need” and assured me by his demeanor that I was not penitentiary-bound.

“Your car registration is four months past due,” he said, and suggested, with courteous authority, that I’d best hie myself up to the Department of Motor Vehicles at the break of dawn. He didn’t need to say “or else” because he could sense I was breaking a sweat.

Idaho teachers make about $11,000 less per year than the average teacher salary in the U.S. and Idaho police salaries are about $3,000 less than average, depending on one’s source. These numbers say something about the values and priorities of Idaho’s elected legislators, who receive almost $18,000 a year — plus a $139 per diem for members who live outside of Boise — which is slightly less than the $18,449 average salary among the 14 other states whose legislators work the equivalent of 57% of a full-time job, according to ballotpedia.org.

When we pass an officer in a Sandpoint patrol car we ought to give him or her a thumbs up and a smile. They, like our teachers, are not only Sandpoint’s face, heart and soul. To cite an aged aphorism, they are our “best foot forward.” We should let them know we know.