Northside Fire is receiving some serious kudos from the Bonner County Sheriff’s Department after assisting them in rescuing some stranded river floaters nearly 50 miles outside of the fire department’s jurisdiction. 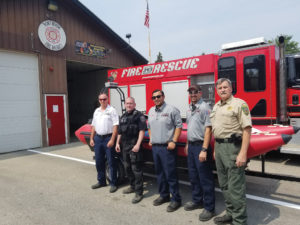 In a statement released Wednesday, BCSO Deputy Jason Davis said he was notified that several women were stranded on the shore of Priest River near Coolin after getting lost while floating and beaching themselves. A man with the floating party had walked to safety, but the rest of them — his wife, daughter and her friends — were still on the shore in 40-degree weather, Davis said.

The only local low-draft vessel capable of reaching the group is a Zodiac used by Northside Fire, so Davis contacted Jake Rich with that department.

“I explained to Jake that, while the rescue request was 50 miles outside of his jurisdiction, his agency’s boat might be the best shot to get the girls out before sunrise,” Davis said.

Rich and Eric Clayton, also with Northside Fire, set out, but due to low water levels and bad lighting, they made it only a mile downstream, Davis said. Rather than turn back, Davis said Rich and Clayton walked their boat several more miles along the shoreline until they found the group of stranded floaters and stayed with them until the Priest River ambulance could arrive.

The boat took hours to recover, Davis said, and their boat trailer sustained damage during the mission.

“Rather than giving up when they learned their vessel was not going to be of assistance, they persisted through cold temperatures and harsh conditions in order to locate, render aid and extract the girls,” Davis said.