Idaho Fish and Game biologists Lacy Robinson and Michael Lucid are approaching the end of a five year odyssey, one that’s covered everything from water temperatures to carnivore habitats to slug penises. 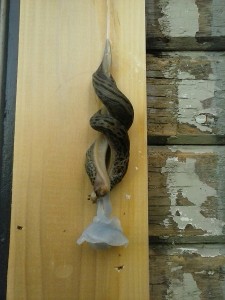 Slugs caught in the act. Photo by Ben Olson

It was all a part of an exhaustive biological study that will provide baseline data that will inform  conservation efforts for years to come. Known as the Multi-species Baseline Initiative, the project was funded through a $950,000  U.S. Fish and Wildlife Service grant and relied on cooperation from a small army of local organizations and volunteers. Now in the final stages of drafting before it’s sent out for peer review, the initiative was previewed to a group of local conservationists at Sandpoint Community Hall Tuesday night.

“I really applaud the work that you’ve done,” said Brad Smith of Idaho Conservation League. “I’m not aware of any other project of this scale and depth.”

While Lucid and Robinson could delve too deeply into the study’s findings until it endures the rigors of the scientific method, they do believe it will have significant implications for regional ecology. Indeed it may well influence priorities when it comes to conservation efforts.

“A primary objective of the project was to increase species ranks, and we’re excited to see if that happens during the 2015 species ranking process,” Lucid said.

Conducted over 22,975 square kilometers across Idaho, Washington, Montana, and Canada, the initiative cataloged reams of data on hundreds of local species. What’s more, the study also collected temperature measurements to better understand the influence of climate change on regional ecology and wildlife.

“This is really a win-win for anyone invested in conservation on any level,” said Lucid.

For carnivores, they utilized a systems of cameras and brushes that collected hair samples for DNA analysis from the animals, who were drawn to the site by beaver carcasses firmly affixed to trees.

“We call [beaver] mountain money,” Robinson said. “It’s the common currency that every carnivore in the area recognizes.”

Snails and slugs were also of interest to the researchers. The team collected an impressive sample size from a variety of slimy critters using traps soaked in various substances, including beer. One such effort yielded a species of slug Lucid believes could be entirely new to the scientific world. Particularly drawn to the beer traps, the slug species particularly impressed experts with its penis size, which is reportedly very large for a gastropod. If Lucid’s suspicion of slug’s undiscovered status survives peer review, locals could have a hand in selecting its name.

“We’ve got this slug with a giant penis that you catch with beer,” Lucid said. “We figured, why not have a naming contest.”

The project also logged climate data, including water temperatures, at 1,169 wildlife survey sites. The data collected over five years will prove invaluable for scientists in studying the influences and impact of climate change on species throughout the region.

According to Robinson and Lucid, the study is necessary to help conservationists make smart decisions based on objective data. A lack of solid numbers is something they’ve felt deeply in their own work.

“That’s why we started this project,” Robinson said. “We were sitting around saying, ‘Wow, I wish someone would have done this 50 years ago.’”

One way or another, the study wouldn’t have been as successful as it turned out without assistance from local organizations, Robinson said. Friends of Scotchman Peaks Wilderness, Idaho Conservation League, Selkirk Outdoor Leadership and Education, the Kalispel Tribe of Indians and many more pitched in to bring the project to completion. In addition, volunteers gave their time to make sure the imitative legwork got done.

“For me and Michael working with citizen naturalists is kind of a new thing,” said Robinson. “What I didn’t expect was the joy of people going out and getting to experience this project.”