It’s been a little more than a year since MickDuff’s Brewing Company owners Duffy and Mickey Mahoney announced they had purchased and would be renovating the historic building at 419 Second Ave. At the time, the brothers hoped to open the space in downtown Sandpoint as the new home of MickDuff’s brewpub in July this year. Of course, everything changed with the COVID-19 pandemic in mid-spring.

“The project was pushed back because of the initial shock and awe of COVID, but also with the booming Sandpoint economy it’s just hard to find subs, electricians,” said Duffy, who serves as MickDuff’s co-owner and CEO. 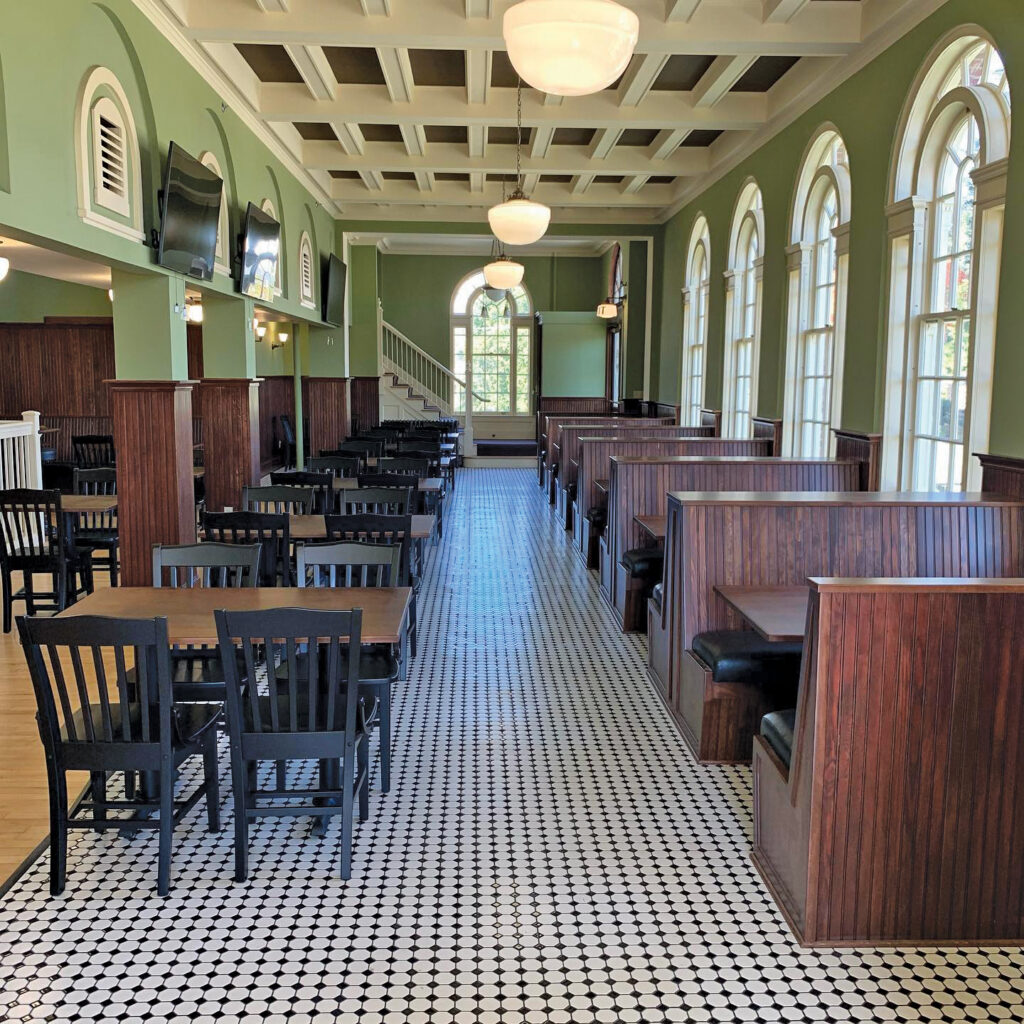 A peek at the new dining room at MickDuff’s. Courtesy photos.

Yet, standing in the vaulted central area of the Spanish colonial revival-style building — which was dedicated as the Sandpoint Post Office in 1928 and later served as the local library and a title company — the additional time spent on preparing the building for MickDuff’s future flagship location has resulted in a space that would be envied by any brewpub in any city, big or small.

“The whole goal was to make it look as if it was original … and it’s going to last for generations,” Duffy said referring to the bartop. “Joel just did an amazing job.”

On a recent tour of the 12,000-square-foot space, the Mahoneys told the Sandpoint Reader that the guts of the kitchen are done; they’re just waiting for equipment. A combination of the global COVID-19 pandemic and the U.S.-China trade war has made commercial kitchen equipment more difficult to come by — especially as the brothers are committed to using only American-made products.

“We’re going to go from one of the smallest kitchens in town to maybe one of the biggest,” Duffy said. 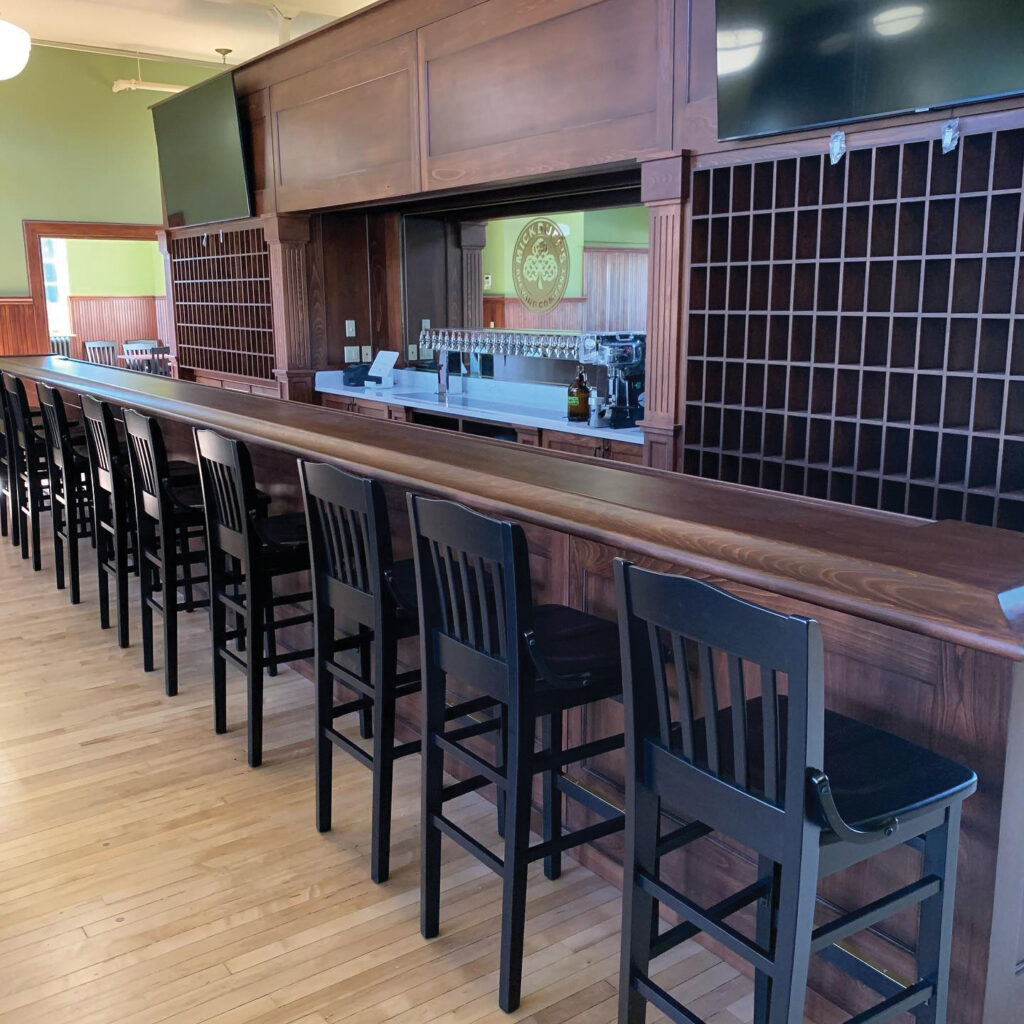 Beyond that, they’re working on installing an ingenious steam heating system that will use a hybrid of natural gas and used fryer oil — the latter being funneled from the upstairs kitchen into the boiler room, where it’s piped into a hybrid natural gas-oil fueled boiler and converted to enough low-cost heat to warm the entire building. It’s a design the Mahoneys came up with themselves, nodding to the old adage that “necessity is the mother of invention.”

“The building is so big and so old, our HVAC guy didn’t think we could get enough heat without steam,” Duffy said.

The brewing operation, which will be housed in the basement along with some office space, a full prep kitchen, walk-in and keg room, comes from Portland Kettle Works — in fact, the Portland, Ore.-based company built the test system for itself to serve its own tasting room. The five-barrel system is an expansion from MickDuff’s previous capacity, but “this has a ton of room — you can fit a lot more,” Duffy said, showing off the brewery with its ceiling open to the dining room and its original floor constructed from concrete and local lake rock.

“They used what they had back then,” said Mickey.

There remain many details to complete before MickDuff’s can open its new space, which Duffy said will likely be before winter blows into town. There are seven office spaces in the top floor, which may be rented or at least one converted into a co-working space. In the dining/bar area and bonus room, which together can seat 126 patrons, the TVs have gone up on the walls but the remainder of the decor is still being decided.

“We’re trying really hard to do decor that’s not ‘industrial,’” said Duffy. “We had originally been shooting for an English-Irish pub type feel”

Despite its large size, the main floor contains a surprisingly small amount of real estate on the walls — in part because of the bank of iconic east-facing windows, which fill the space with natural light.

According to Mickey, the brothers have spoken with the Bonner County History Museum about incorporating the building’s long, important past into its present.

“They actually have pictures from the original construction and could make this kind of a museum,” Mickey said, adding that other artifacts include the old spittoons that used to grace the building during its incarnation as the local post office, as well as blueprints and plans during construction in the 1920s.

The building itself, however, is a work of art — including both original features and those that the Mahoneys have created to match its vintage style. From the subway tiles (new) and heavy metal safe door (old) in the main floor women’s bathroom — which once served as the postmaster’s office and, later, the children’s reading room — to the “mail slots” that they had constructed flanking the 24 taps, where mug club vessels will be held.

It’s an attention to detail that perhaps wouldn’t have been as readily accomplished without the various delays that no one could have controlled.

“A big goal of the project is that we’re trying to spend the extra time to do it right,” said Duffy, adding, “I’ll be glad to be done with this project. It’s probably the biggest thing I’ll ever do in my life — me and my brother together.”