Energized for projects ahead: ‘We will accomplish great things’

Mayor Shelby Rognstad stood Dec. 26 for his swearing in as mayor of Sandpoint — the first second-term Sandpoint mayor in almost 50 years. 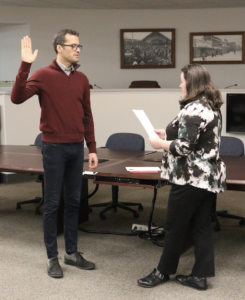 “It’s a privilege to serve as the first two-term elected mayor in nearly half a century,” Rognstad told the Reader in an email. “I’m also honored to have earned the trust and confidence from voters who turned out in large numbers to reelect me by a 20% margin, particularly when challenged by a capable candidate in Councilwoman [Shannon] Williamson.”

The 2019 mayoral election was especially heated, pitting incumbent Rognstad against City Council President Williamson, whose career as executive director of the Lake Pend Oreille Waterkeeper ended in a public, acrimonious way when she and a former board member alleged her firing was the result of her decision to run for mayor against Rognstad. LPOW board members denied that her firing was politically motivated, though told the Reader in the final days before the Nov. 5 election, “We did … question the rationale of not bringing her intentions to the board and engaging in a conversation that would that would analyze the pros and cons, and/or the ramifications, of our executive director holding down the Mayor’s position simultaneously.”

Despite that, Williamson wrote, in part, following the election: “Congratulations on your victory Shelby! I look forward to working with you, the rest of the council and our amazing staff over the next two years in a collaborative and productive way to achieve great outcomes for the city…”

On the occasion of his swearing in, Rognstad expressed excitement for working with the new council, which includes incoming members Kate McAlister and Andy Groat, alongside incumbent Councilwoman Deb Ruehle.

“I see in them strength and courage, which will serve the council well given the challenges ahead,” Rognstad told the Reader, referring to McAlister and Groat. “I also look forward to continuing work with Councilors Ruehle, Williamson and [Joel] Aispuro, who have demonstrated their commitment and dedication to Sandpoint. I expect that we will see a dynamic council with thoughtful deliberation and leadership that can usher in a brighter future for Sandpoint and the region.”

Rognstad and the new council move into 2020 with a host of big-ticket issues on their agenda, including ongoing master planning efforts touching on parks and multi-modal transportation, as well as downtown street construction and the city’s comprehensive plan update — not to mention the ongoing lawsuit brought by Bonner County against the city regarding the no-weapons policy held by The Festival at Sandpoint, which leases publicly-owned War Memorial Field for its annual concert series.

Rognstad said he’s energized for the projects ahead, calling the continuation of a second term as mayor “a natural progression, particularly given the master planning work currently under way. Seeing these processes through will ensure Sandpoint is poised for strategic success, fiscal responsibility and resilience well into the future.

The mayor enters his second term after many years of involvement with city governance, including his first role in 2007 as a member of the Comprehensive Plan Steering Committee. He followed that with an appointment to the Sandpoint Planning and Zoning Commission in 2009, serving as vice-chairman, until his appointment to the City Council by late-Mayor Marsha Ogilvie in 2012. From there, Rognstad rose to City Council president in 2014, in which position he served until election to his first term in November 2015.

“Each of my roles in service to the city have had their unique set of challenges,” he wrote. “[A]ll these experiences build on one another in knowledge, understanding, responsibility and impact.

Citing his long experience at City Hall, Rognstad wrote that he is “disappointed when I see people run for mayor who have no previous experience or civic involvement and little desire to learn. That is ignorant and irresponsible. Experience matters, especially for a mayor. I can’t imagine anyone doing this job without having a wealth of direct experience to rely on.”

Looking to the coming year — as incoming councilmembers are set to be sworn in Jan. 2 — Rognstad wrote that, “This is going to be an exciting four years. The council and I have the privilege of working with incredibly talented, hard working city staff. Together, we will accomplish great things that have a lasting positive impact on the city of Sandpoint.”