Thanksgiving is upon us! Let the tryptophan-induced coma commence!

Well, we would, if it were a thing. 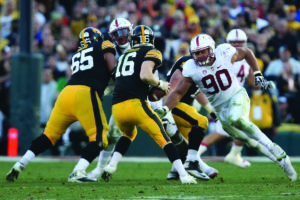 The tryptophan (an amino acid) isn’t what’s putting you to sleep. It’s your body trying to digest a tremendous caloric intake from the massive amount of starches and proteins you just forced down your gullet. It’s taking energy away from other functions and devoting it to digestion. Thank our primordial ancestors for this annoying function. A day of feasting wasn’t on the survival agenda 50 million years ago.

Everyone’s going to be talking about turkeys and recipes, so it only makes sense that I talk about the science behind food, right?

I’m stepping out of my comfort zone and diving straight into football!

Anyone that’s ever been to or heard of America knows the basics about football. Each team has 11 players (12 in Seattle. Wink), the players tackle each other and the guy with the ball tries to get the ball down the field while the other team tries to stop him. There are so many more nuances, but we’re not going to cover that today.

We’re going to start with records.

Peyton Manning threw a record 71,940 yards in his career. This is just successful passes, nevermind what he did during warm-ups, practices, off the field, to show off at parties, etc…

Brett Favre holds the record for getting sacked the most times in a career, at 525. How many times do you think you can take a shot to the gut from a 325-pound defensive lineman?

Emmitt Smith has the most rushing yards in a career, at 18,355. That’s like three 5Ks, except there are 11 dudes trying to run you down while you do it. New marathon idea! Let’s make it happen!

The longest field goal kick in the history of the professional game is 64 yards. Had Matt Prater kicked it straight up, he would’ve hit the Statue of Liberty in the chest with that ball, no exaggeration.

The average football sack is no joke. The guys on the screen make it look like child’s play to be hit by forces in excess of 1,600 pounds. Now, your average defensive lineman doesn’t weigh 1,600 pounds, but he produces that much force in a tackle. Sometimes, that number can go much higher. If all of that force were impacting the area of a ballpoint pen, it would be like getting impaled by a harpoon. Luckily, it’s spread out over a wide area, slightly lessening the chance for a debilitating injury.

You always hear about football players getting concussions, and there’s a good reason for that. It’s a very high-contact sport. These guys are pros, and they make it look easy, but the reality of it is it’s still two men over 200 pounds colliding at speeds in excess of 18 mph.

The concussion happens during one of these impacts. Even if their skulls don’t collide, and even if they’re protected by helmets, their brain is still being carried by the energy of their forward movement, so when the skull stops, the brain keeps going until it hits something: the inside of their skull. This causes bruising. Bruising isn’t a big deal unless it’s in the part of your body that literally controls your ability to be alive.

Really, the helmet is just there to keep their skull from breaking open, which is pretty bad, too.

It has been calculated that the g-forces sustained by professional football players during a hard collision can be as much as 15 times that of a fighter pilot. The reason players don’t instantly black out and/or die from every impact is because major impacts are rare and sudden, whereas fighter pilots can undergo intense g-forces for several sustained seconds, which causes havoc on their ability to pump blood and oxygenate their brain.

Sometimes, the impact of the game can be felt far beyond the stadium. In 2011, the Seahawks were facing off against the Saints.

Oh yeah, you know where this is going.

Marshawn Lynch broke nine tackles, to score a 67-yard touchdown. The crowd went so completely wild with the screaming, jumping and applause that they actually caused enough noise to register as an earthquake on seismographs nearby. It became known as the Beast Quake, and is part of Seattle’s interesting tourist facts to this day. Superman, doh!

I’m not going to eat up any more of your holiday, unless you pass the pumpkin pie.

Have a happy Thanksgiving! Be thankful you get to watch someone else spend their day getting crushed by 100 g’s, and not you!