In 1953, Marilyn Monroe famously proclaimed that “Diamonds are a girl’s best friend” (though the song is actually from 1949.).

Turns out, diamonds are a lot of people’s best friend, from scientists to engineers and construction workers, too. 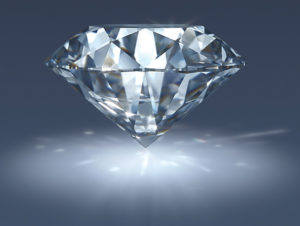 Diamonds are a collection of carbon molecules, neatly stacked and hardened by the culmination of over a billion years of heat and pressure. Contrary to popular belief, the diamonds we have today don’t come from coal, despite both of them being carbon. All diamonds we have now are at least 1.1 billion years old, making them at least 600 million years older than the first plants, which would go on to decompose and be pressed into coal by geological forces.

We know coal can exist as low as about two miles underground. Diamonds, meanwhile, originate from as far as 100 miles beneath the Earth’s surface. Now, we haven’t dug down that far for technological and practical reasons, so how do we get diamonds?

Volcanism. Most of our diamonds are encased in other rock that’s forced from the mantle to the crust by magma vents. It’s kind of like an elevator, if the elevator were made of 1,500-degree magma, which is about as uncomfortable as most crowded elevators I’ve been on.

Diamonds are most famous for their looks. I mean, check them out. They’re beautiful!

We cut them like that on purpose, they don’t just pop out of the ground like that. In fact, most of our diamond supply is actually used for industrial and mining purposes. Diamond is, after all, the hardest substance we’ve managed to dig up.

Diamond is hard and clear, making it great for all sorts of zany applications. Diamond blade saws are sharp, efficient, and don’t take smack talk from anyone. (Take that, unattended digit!). Diamond grinders can grind anything, including other diamonds. We even have diamond-edged cooking knives. Why? Why not! Cleave that turducken in twain like a Viking warlord!

One of the coolest applications for diamond is called a Diamond Anvil Cell. Essentially, it’s two diamonds rigged to press against one another (There’s a lot more to this, so look it up!) to exert insane amounts of pressure. I’m not talking, “Ouch, you pinched me!” I’m saying it may be possible to use one of these puppies to smash hydrogen gas into metallic hydrogen.

That’s a process that, in nature, only occurs at the heart of gas giants.

Even more awesome, since diamonds are clear, you can use a laser to heat what you’re trying to smash, creating incredible heat and pressure to create things like, oh, I don’t know.

Creating diamond is a lucrative business, and one we’re getting a heck of a lot better at doing. We are currently making diamonds that are so convincing, only trained gemologists can tell them apart from real diamonds by using special tools.

We live short lives, and we don’t have a billion years to wait around. I want my diamond beard trimmer yesterday!

Anything this awesome, this rare, that can be used for this many things surely doesn’t have a clean track record. The history of the diamond is not a rosy picture. I mean, who hasn’t heard of the term blood diamond?

Blood diamonds are diamonds mined in unstable countries, like Sierra Leone, where international buyers fund warlords that capitalize on cheap (or slave) labor to mine diamonds for next to nothing.

World governments have been getting better about tracking and monitoring diamond trade to help cut down on these revolting practices, but they still continue, and likely will for as long as someone has a demand for diamonds.

However, while reducing legal channels may increase the value, synthesizing on an industrial scale would have the opposite effect.

Diamonds are pure carbon, who’s to say that synthesis couldn’t also play a part in reversing a changing climate? If you pull CO2 out of the air, are able to split and collect it into C and O2, use the C to make diamond-edged eating utensils while breathing some nice, fresh air.

The guy that figures out that process will have a lot of best friends. Diamonds will certainly be among them.