There exists a bunker buried deep in a mountain, on an island, halfway between Norway and the North Pole. This bunker is designed to survive earthquakes, volcanic eruptions, storms, nuclear detonations and military invasions. It is an impenetrable fortress with an interior temperature of 30.2 degrees Fahrenheit.

You might expect this bunker to house some kind of defense testing, aliens or even a crafty James Bond villain, but the contents of this bunker are far more exciting.

Deep beneath thick layers of rock, permafrost and concrete lies an insurance policy for the entire human race: seeds. 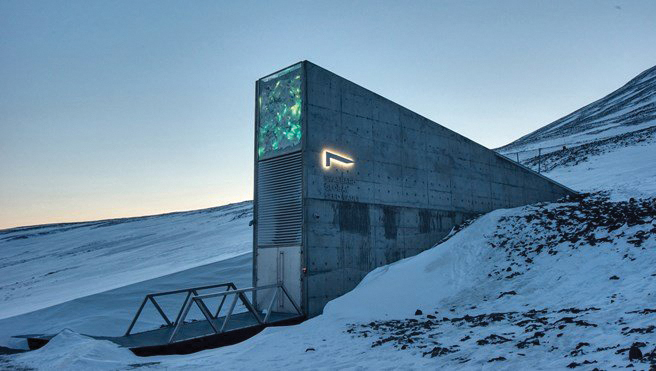 The Svalbard Global Seed Vault exists to keep a physical back-up of seeds submitted by the governments of the world in order to preserve our food supply in the event of a terrible disaster. This disaster could be any of those listed above, as well as catastrophic climate change that renders certain types of plants extinct on the surface of the Earth or a disease with a similar outcome. In the event something like this happens, global governments will have the ability to quite literally re-seed the world and start anew.

As I’ve learned from years of running tabletop games, the idea of a world-spanning catastrophe always seems too large in scope for us to fully appreciate. Extinctions only become evident after the fact — you only miss what you can’t have. So, for a moment, imagine if over the course of the next five years a disease were to start affecting tomato plants. The first two years, scientists tell us the disease is spreading. By year four, all but a few tomatoes are left and by year five the tomato as we know it is completely extinct.

What are you going to put on your burger, now? Jicama?

While this scenario sounds like the plot to a bad YA novel, the likelihood of it happening at any time is surprisingly high. Did you know that seedless grapes all originate from the same few plants? New seedless grapes are grown from the cuttings of an older plant, which was grown from the cuttings of an even older plant. New genetic material is not passed from generation to generation, because we are essentially copy-pasting the plant into existence. This makes it extremely susceptible to disease, and should a particularly potent strain begin in a vineyard, seedless grapes could be wiped off the planet in just a couple of years.

Remember the banana-flavored milk from the ’90s? It would disappear like that, without you noticing until you wanted a sweet taste of nostalgia.

That is where the Svalbard Seed Vault comes in. You might be a little perplexed. Why put it so far out of the way? Why don’t we just have seed vaults everywhere?

We do. However, most other seed vaults rely on electrical input to maintain freezers that will keep the seeds at 30.2 degrees Fahrenheit. Any higher than that and the seed can spoil. Lower, and the seed will be killed. Like Han Solo frozen in carbonite, this temperature keeps the seeds dormant without irreparably damaging them.

Svalbard, on the other hand, sits far enough north — and the vault is deep enough underground — to maintain a steady temperature, with or without power. Burying structures is a surprisingly common practice when it comes to agriculture, as large amounts of earth have a wonderful insulatory factor. Walipini greenhouses are buried to maintain a steady temperature within the greenhouse, while solar-thermal greenhouses pump hot air from the greenhouse down a few feet into the ground to disperse the heat before coming back up to cool the structure.

You might envision a seed vault to look something like a bank vault filled with little safety deposit boxes, but the interior of Svalbard’s gene bank looks more like a warehouse filled with heavy black totes. Within these totes, seeds are contained in a specialized triple-ply foil bag that helps maintain a safe and steady temperature — similar to MRE bags used by the military. The vault maintains about 500 seeds per individual variety: Imagine a packet of 500 Brandywine tomato seeds, with another packet of 500 Big Rainbow, then 500 Beefsteak and so on.

Care to guess how many seed varieties are currently stored in Svalbard?

The Crop Trust, which oversees the operations and maintenance of the seed vault, also maintains research and generates funding for other gene banks throughout the world. In recent years, a number of vaults have begun storing valuable seeds in countries in Africa and have received invaluable financing and guidance from Svalbard.

Did you know the library has its own miniature seed vault? The seed library is completely run by volunteers and sits in an old-school card catalog cabinet to the left of the elevator. The premise of the seed library is simple: Take seeds during the spring, and bring seeds back from your harvest in the fall.

The seed library can only take locally grown seeds from heirloom plants, and each seed needs to be documented when it comes in. It’s vitally important that the volunteers know what type of plant the seed originated from, or it can’t be circulated for safety concerns. The seed library desperately needs donations this harvest season, so consider donating some seeds from your plants this fall. The fruit of a single tomato can provide up to 300 seeds, which could put three tomato plants in the gardens of every resident of Hope at no cost.