Mad About Science: The moon

Planet Earth’s closest celestial neighbor has a lot in common with the big blue marble we call home. While it’s true that there isn’t any liquid water on the moon or breathable air — which means no life that we’re aware of — much of its constituent rock has a familiar source: Earth. 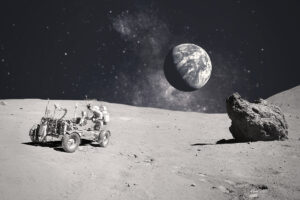 An astronaut on the surface of the moon with Earth in the background. Photo courtesy NASA.

Earth spun around an infant solar system for about 50 million years as a bachelor before something happened to create the moon. It’s believed that around 50 million years after the initial formation of the solar system, Earth was hit by another planet with a totally bonkers orbit called Theia. This impact released a massive amount of energy, virtually liquefying both planets and merging them in the process. A huge amount of liquid rock was spun off the fledgling Earth and formed a disc of molten rock.

While some of this rock must have cooled down fairly quickly, a large enough glob of it held enough mass to generate its own gravity as centrifugal force spun the chunk around. This proto-moon pulled rogue bits of rock from the spinning disc around Earth and squeezed it to re-heat the minerals and smash them with a unique combination of pressure and heat. Over a time of likely hundreds of millions of years, this rock cooled and settled to find itself locked in a long dance with Earth.

If you’re worried about what this might have looked like for anything living at the time of the great impact, don’t worry. There is absolutely zero chance that anything was living on Earth at this point. Earth looked a lot like Mustafar from Star Wars Episode III: Revenge of the Sith for what we assume was hundreds of millions of years. It was absolutely not a planet you would have wanted to build a vacation home on — at least not yet.

As nightmarish as this may be to imagine now, it must have been remarkable to gaze up and see the moon at this time. Imagine not the bright, yellowish-white crater-marked surface we see today, but a giant red-orange sphere cracked from pole to pole by rivers and lakes of molten stone. The early solar system was a rough-and-tumble game of cosmic pinball.

Eventually, the Earth and the moon fell into a rhythm. Possibly because of Theia’s impact, Earth has always had a wonky wobble as it orbits. The moon’s gravitational tug keeps this wobble from getting out of control. This allows the Earth to experience four distinct seasons, which life has evolved to require to flourish.

You’ve likely heard many times in your life that the moon is responsible for the waves of the ocean and, to a lesser extent, that’s also true of our own Lake Pend Oreille. Ever wondered how this works? It all has to do with gravity.

Imagine that Earth’s gravitational field is like a giant hula hoop. If Earth were alone, it would be darn near perfectly circular. However, the moon has its own gravitational hula hoop that is interlocked with Earth’s. As the Earth and the moon swing around a shared point like two tango dancers pulling back from one another, Earth’s hula hoop deforms, shrinking in the middle but expanding at the sides. Water on the side nearest to the moon is pulled toward it, deforming the sphere to create more of a football shape to match Earth’s funky hula hoop.

Meanwhile, on the opposite side of the planet, water is attempting to move away from the moon, but is overtaken by inertia that pushes it into a high tide. This makes low tides occur where Earth’s hula hoop is squished, and high tides where the hula hoop is pulled out.

Since the Earth is spinning and both bodies are constantly moving, the tides will shift, rise and fall.

If you’re thinking that this must be an incredible source of energy, you’d be absolutely right. These are planetary forces that are constantly moving all of the oceans. Imagine if we had a safe way to convert some of that energy into power that we could use to illuminate our homes, power our computers or even travel to work and back.

Speaking of huge amounts of energy, have you ever wondered why the surface of the moon looks a little bit like swiss cheese? Those are all impact craters from a mixture of things: comets, asteroids and debris from the very beginning of the moon’s formation.

The reason this is interesting is because every single impact crater that has been witnessed through history has been caused either by debris from Earth, or by fast-moving ice and rocks that narrowly missed Earth to impact the moon.

On Earth, our atmosphere and the water trapped within it erodes craters over time. On the moon, those craters are preserved until they’re turned into even larger craters from bigger impacts, essentially giving us a snapshot of celestial history in our backyard — all within clear view of our naked eyes.

Is your curiosity about the moon piqued? Join the library on Saturday, June 11 at 8 p.m. at City Beach for a moon viewing party. This is a great opportunity to look at the moon through binoculars and a telescope to get a better view of our celestial neighbor. I’m even prepping some fun experiments for the kids as they get to see what happens when we emulate an impact on the moon’s surface.

Keep an eye out for a reminder next week, as we look at some more fun and interesting facts about the moon.