So, you got a brand new 7 million-inch TV on Black Friday for $8. Sure, to get it you only had to pick up another shopper and throw them like Darth Vader threw Emperor Palpatine in Return of the Jedi, but for $8? Worth it. 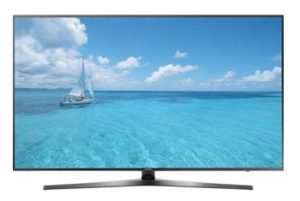 Now that you have your 583,333-foot TV in that perfect spot, are you starting to wonder what makes it work? How is it projecting such crystal-clear pictures directly to your eyeballs?

That, my friend, is science. Let’s break it down.

Televisions come in a few varieties with lots of confusing acronyms: CRT, LCD, PDP, LED, OLED, QLED, HD, 4K, 5K, you name it, it’s probably there. These distinctions are more than posh marketing scams, they all mean something and, depending on the type of picture you want, it’s pretty important to you as the consumer.

Let’s start with some outdated technology: CRT, or cathode-ray tube. CRT displays are characterized by being boxy and heavy — like most TVs from the ’90s and earlier. These types of displays fire beams of electrons through a tube, which is controlled by coils that focus and deflect the beams onto a fluorescent screen with a number of colored pixels that create an image. Though very outdated, CRT displays are famous for their reliability and longevity. Also, if you’ve ever had to move them out of a third story apartment with one other friend, you know they’re extremely heavy.

PDP stands for plasma display panels and was a very popular type of TV around the advent of high-definition TVs (HDTVs) in the early 2000s. Plasma TVs have two glass plates with a small gap between them for the screen, where neon and/or xenon gas is housed inside of millions of pixels. Each pixel is coated with phosphor, which produces light when electronically charged, which in turn creates a picture on the screen when working with the other pixels.

LCD forms the basis for all of the following TVs, and stands for liquid-crystal display. These TV sets ushered in the era of the flat-screen TV, and have a bright white light behind the screen. The screen has millions of pixels, which are made of even more sub-pixels made of liquid crystals stuck between two glass filters. These crystals rotate to allow shades of color to pass through, making deeper, richer blacks and brighter whites than CRT or PDP TVs, which had pixels with only three static colors.

LED, or light-emitting diode, TVs operate on this same principle, but use an array of light-emitting diodes rather than a large light in the back of the TV. This allows manufacturers to create much slimmer units at a much lower cost, and which are also easier to repair — one of the reasons we’re seeing TV prices plummet into double digits around the holidays.

OLED TVs use microscopic pixels made from organic materials like carbon mixed with other chemicals. When an electronic charge hits these pixels, they light up based on what the computer is told to process. QLED uses something called quantum dots, which are insanely small — between 2 and 10 nanometers (DNA has a diameter of 2nm). Each of these quantum dots come in a specified color, and when set in an array can create very rich colors and contrasts.

So, what about the difference between HD, 4K, 5K and beyond? That is the resolution of your television and a rule of thumb is the higher the number, the clearer the picture.

You can also factor in the refresh rate of your television for a smoother image. Most TVs have 60-hertz refresh rates, which means they’ll refresh 60 times per second. Very smooth, higher-end TVs will offer 120hz refresh rate and, in my opinion, anything higher than 144hz makes the picture look like claymation. There are cutting edge televisions that refresh 240 times per second, and at the time of writing this, start out around $4,000. At four grand, that TV better dispense kombucha on demand.

If this is all crazy and overwhelming, and if you’re starting to doubt that 110-mile wide TV you just bought, have a chat with one of the tech desk attendants at the Sandpoint library. They live for this stuff. Otherwise, call NASA. I’m sure they could use a screen the size of the Payette National Forest.