Were you to consider every animal that has followed humans throughout the ages, none has been more enduring or relentless than the common rat. You might believe there is only one type of rat, but there are several different breeds of the rodent. The most common rat we think of is the black rat, or Rattus rattus. These beasts were a major vector for spreading the bubonic plague, known as the Black Death from 1347 CE to 1351 CE. That little pandemic resulted in the deaths of up to 200 million people in Europe and North Africa, which may have been as much as one-third of the European population at the time.

Rats are as crafty and resilient as humans, as well as lovers of all our food, but with the evolutionary perk of being much smaller than humans. This trait lets them slip into cracks that humans can’t get into, allowing them to stow away on ships, trains, trucks and other commercial trading vehicles. Even worse, they’re often heavily diseased and feeding on the food that is intended for human consumption, easily spreading myriad diseases to humans.

It’s easy to believe that rats are just a nuisance that should be wiped out but, like other pests such as mosquitoes, they are an important part of the ecosystem. 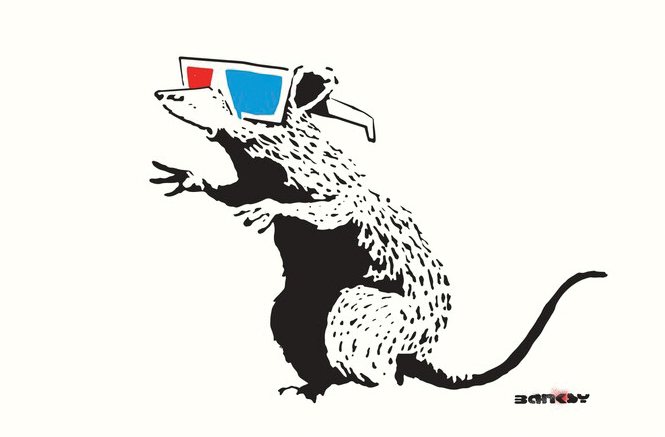 A rat drawn by the anonymous street artist Banksy.

Rats are by nature scavengers and prey animals. As filthy as they are in human environments, they’re an important part of keeping natural areas clean of rot and decay. Pack rats are a common nuisance around here, easily identifiable by their furry tail, unique to forest rats. If they aren’t encroaching on human homes, they will eat most plant matter in the forest within their reach, while also being a staple food for hawks and other raptors, as well as an important food source for coyotes and the occasional bear.

Rats reproduce quickly, having a gestation period of just 23 days. Rats also reproduce in litters, birthing several babies at once. As with many rodents and other prey animals, rats will often enter estrus almost immediately after giving birth, which can lead to multiple litters of baby rats in a very short amount of time. A female rat will undergo menopause and lose fertility after about 18 months, which is about the lifespan of the average domesticated rat. All of these traits make them especially important as prey animals in the food chain, able to provide a sustainable food source for larger predators.

However, like the humans they follow, rats are an adaptive and destructive force for some ecosystems. Rats have destroyed fragile ecosystems around the world by out-competing any other animals that share a food source.

To put how they do this into perspective, have you ever been in line at a food truck and see a large family queued ahead of you? You know the food truck is prepared and will have enough for everybody, until more members of that family start showing up and getting in line alongside their kin. Before you know it, the family has come, gone and taken all of the delicious tacos you were waiting for — even if they never directly interacted with you. Now you’re hungry, your lunch break is over, and you see that same family migrating toward your favorite smoothie stand. This is how the most effective invasive species operate. They don’t eat the native wildlife, they eat all of its food.

In some places around the world, rat populations can boom to staggering numbers. Every 50 years, India suffers from an event called the “rat flood.” The local bamboo in the region will flower and seed at once, creating a plethora of food for the local rats, which will go on to breed en masse, devour all of the bamboo seeds and then move on to human habitations nearby in search of a new food source. This problem is so severe that, in 2006, the Indian military had to intervene to prevent the outbreak of a famine in the area.

Could you imagine the National Guard being called in and deploying infantry on a horde of rats? See that, Hollywood producers? I just handed you your next hit movie. Please forward me the royalties.

Despite all of the negativity, rats have had a vital impact on our species’ ability to survive. The importance of their role in research is twofold: first, they are intentionally inbred to maintain a uniform genetic template for researchers; second, their genetics and behaviors are markedly similar to humans, granting us a glimpse into how new medications may affect humans without actually having to test them on humans. Sure, it’s the definition of inhumane, but I sure am glad that they tested potentially lethal drugs on a short-lived animal rather than testing them on me or you.

Rats are a popular pet, and are fairly easy to raise. Similar to guinea pigs and hamsters, their living area needs to be kept clean or they start to stink. A dirty rodent is a prime vector for disease, the last thing you want rolling around on your nightstand. While owning a rat isn’t my cup of tea, I will admit they can be trained to be extremely friendly and sociable creatures, while also having the benefit of being very short-lived, thus not requiring the commitment of something like a dog, which lives for up to 13 years, or a goose which can live in excess of 30.

Unlike a goose, I wouldn’t recommend eating the rat when you’re done with it.