Mad About Science: Lobsters and Friends 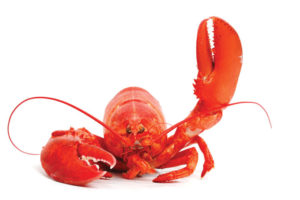 What can be said about the lobster that we don’t already know? They have eight legs and two claws, and if they didn’t taste so darn delicious, they’d be a thing of nightmares. Did you know they also have blue blood? I’m not talking your hoity-toity aunt Sally kind of blue blood, but actual blue blood. Their nightmarish friend, the spider, also has blue blood because of something called hemocyanin, which has a high presence of copper. Our blood, meanwhile, is red because of the iron in it. If blood makes you squeamish, just remember: It looks that way for the same reason we call Mars the red planet.

Also, it’s an instinctive reaction to knowing we’re in danger when we see our life flowing out of us, but that’s a problem for another time.

Another cool fact about lobsters is they can live up to 50 years. Most of them don’t, because they end up being boiled alive well before that happens, but it must be soothing to know that lobster retirement is a possibility. Another weird thing is that lobsters actually gain vigor with age, with their fertility and energy improving as they grow older. This stems from a special enzyme found during fetal development of most animals, one that goes away after the developmental stage, but remains in the lobster indefinitely. Unfortunately, eating lobster won’t make you any younger.

Also somewhat related to that factoid, lobsters are able to add muscle mass throughout their lives and they grow in size each time they molt. While it’s true that humans can somewhat accomplish that feat (We’ve all heard of the 75-plus-year-old ironmen), our cells begin to degrade over time, and we eventually start losing muscle mass.

When lobsters molt, they’ll occasionally eat their old skin. This might sound gross, but their skin has probably seen less than your fingernails, and look at how many people chew those to the nub with stress. This makes sense for lobsters, as they can directly recycle nutrients from their old exoskeleton to put towards the new one, similar to when a chicken will eat her own eggs when presented with a calcium deficiency.

Usually, lobsters walk around on the seafloor. This retains their energy as they’re willing to eat anything, and a lot of anything doesn’t tend to move very fast. However, when they’re frightened, they’ll essentially do really fast crunches with their abdomen and zoom away in speeds excess of 10 miles an hour. This is called the caridoid escape reaction and it’s absolutely hilarious to watch.

When it comes to preparing animals as food, lobsters definitely got the short end of the stick. Most other animals are killed instantaneously and then butchered well before we get our grubby butter-slicked paws on them. Lobsters, not so much. In most cases, they’re alive moments before we order them, and sometimes we get to watch them boil alive in front of us. This is among the worst ways to die, I’m sure (right up there with getting mauled by wolves or bitten by a Black Mamba), but for us to consume them it must be done. Being a bottom-dwelling oceanic species, lobsters absorb a lot of bacteria into their bodies, which deposits into the flesh. While it’s alive, its natural systems can keep these in check. After it’s dead, decomposition happens very quickly and the meat spoils, which can make us very sick. Boiling it to death cooks it and kills the bacteria before it can proliferate and sicken us.

As long as you’re cooking it immediately, you can humanely kill a lobster by driving a knife directly between its eyes. This is called pithing, and it’s not a practice limited to lobsters. In fact, many commercial animals are slaughtered this way as it’s more accurate and easier to clean than shooting it, which presents the opportunity of bullet fragmentation that could ruin meat or even harm the person slaughtering the animal.

Crayfish are relatives of the lobster, though you may know them better as crawfish or crawdads. They’re a staple of southern cuisine, but try as you might, you won’t replicate that southern taste from our crayfish around here. Like the geoduck, the taste of crayfish flesh changes dramatically based on the water quality and type of mud they happen to dwell in. I’m sure that the temperature difference between here and the South has a lot to do with the differing taste as well.

Crayfish can also be kept as pets in aquariums, but only buy them from a certified vendor. Ripping one from its home in the river is a terribly inhumane thing to do, and you have no idea what kind of diseases it could be carrying that may or may not be transmissible to you when you clean its tank.

The woodlouse is also related to lobsters. This is pretty crazy, because the woodlouse is terrestrial and not aquatic. Woodlice are beneficial to gardeners because they help break down organic material for composting. If you happen to find a boatload of them in your house, it likely means you have a moisture problem of some kind, be it a leaky pipe or a crack somewhere that’s letting water into places water shouldn’t be going.

Unlike lobsters and crayfish, woodlice don’t taste good with butter. In fact, people have described them as tasting like urine.

Well, there went my business proposal for “Gray Woodlouse Restaurants, LLC”. I guess I can always try my hand at selling cheddar biscuits.