Horses are some of our oldest animal companions. The quadrupedal ungulates of many a young girl’s birthday party dreams are the reason humans were able to achieve vast farming operations and explode in population. Basically, we rode horses right into the agricultural revolution. 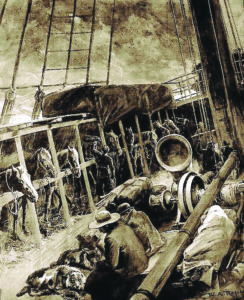 Because of their close relationship to humans, horses have gone where we’ve gone, much like cockroaches, rats and mice, though let’s be honest: you’re way more likely to lovingly pet a big ol’ friendly horse than a cockroach or a rat.

Around here, it’s not unusual to find yourself behind a horse trailer. At first, you’ll find it endearing to see this big, beautiful animal out for a ride on an Idaho road. Then the horse does its business and you get to smell it for the next 16 miles. In actuality, horse travel throughout history hasn’t differed much from this. First, you put a horse in a box, then you move the box and the horse to the destination.

Some of the oldest and most unique horse movement happened around 1500 BC when the Persians and the Greeks were warring with each other on apocalyptic scales. Seas divided them, yet they needed cavalry to dominate land battles. So how would they transport their horses? On a boat, obviously!

Between 1500 BC and 1900 AD, little changed in the way of aquatic horse transportation. The basics were as follows:

Tire the horse out before the voyage. This might seem dangerous, but it’s the only way you’re going to have an animal calm enough to avoid hurting itself. Handlers would usually withhold food and water before and during the start of the voyage to keep the horse weak as well, because stress caused by inactive hunger is less detrimental than the horse going on a rampage and breaking a leg.

Ships transporting horses were specially designed to be floating stables. They didn’t just stuff them into crates or load them with the cargo, they had their own lodgings on ships. Anyone familiar with history will realize horses were treated better than humans for the 400-plus years of African slavery in America, a truly sobering and depressing thought.

People used giant slings and cranes to load tired horses onto the ships.

The most difficult part of any sea voyage for a horse was the middle. Ships, especially old sailing ships, are uncomfortable for humans but a nightmare for our equine friends. Horses require a gallon of fresh water per 100 pounds of weight per day in order to be healthy. That means a single horse would require about 12 gallons of fresh water per day, which would weigh about 100 pounds. During the colonial times, a fast trip was about 33 days, which means one horse would need 3,300 pounds of water to stay healthy. Multiply that by however many horses you have, and your boat is going to sink. During sea voyages, horses were given pretty strict rations to keep their energy levels low. Slings were sometimes provided for the horse if it wanted to lay down, though it was bad for the horse to stay in a sling for the whole voyage. Handlers would often massage the horse’s legs as well to improve circulation, since there wasn’t very much room to walk around in a ship. Fresh air wasn’t an option considering they were housed below deck where urine and waste particles likely mixed with brine and soaked into the wood. Respiratory issues were a major concern.

I’ve read conflicting information about the mortality rate of horses during sea travel, some sources said extremely high while others said extremely low. I’d imagine they were handled the same way as an expensive engine is now, and if you were willing to spend the massive amount of money required just to transport the thing, you were going to spend even more to make sure it was still alive once you landed.

If it did die, though… I’ve read that could be the origin of the British naval term “salted horse”. Salted horse is basically any form of meat that sat in a barrel of salt across long sea voyages. While you might be thinking about delicious jerky, it was probably more like gnawing on a petrified stump. A dead horse, no matter how tough, would look like veal to a crew of hungry sailors.

Is that all? Neigh! I have more wild ways we’ve transported horses in recent years.

Enter: Air Horse One, a special 727 jet that rigs to special ramps that connect to horse trailers that ferries race horses around the country. It’s fast and comfortable for the horses, keeping them well rested between races. I wonder what their in-flight movie is.

Horses driven by… other horses! During the 1800s, race horses were treated like royalty and given their own special carriage that was towed by as many as four other horses. This has the same premise as the horse jet, the race horse didn’t risk injury or fatigue while traveling this way. For some reason, some people found this practice uncouth and barbaric, but were totally OK with horses on ships.

The next time you’re stuck behind a horse trailer, just roll your windows up and thank your lucky stars it’s not 1500 B.C.