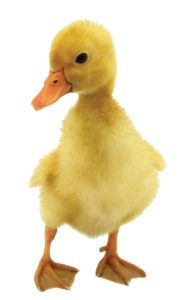 Raising waterfowl can be a deeply gratifying experience, but it’s not for everyone. Waterfowl tend to be quite loud and very messy, even after you’ve raised them to maturity. They require more space and they’re not entirely happy unless they have a source of water they can splash around in — no small feat in the middle of town. Most breeds of domesticated geese can also live up to 35 years, which is a very long time if you’re unlucky enough to possess an unfriendly goose.

Keep some of the challenges of this article in mind when you see the pile of adorable, fluffy little heathens stomping around the farm and feed stores here in a few weeks. Unless you’re up for a challenge, please don’t make an impulse purchase. Just marvel and move on.

With that being said, if you think you’re up to the task of raising ducks or geese, I’m here to help. Let my experiences illuminate your path to a happy and healthy flock.

Waterfowl, like chickens, need an enclosed brooder with a constant source of heat for the first few weeks of their lives, as well as a source of food and water. Depending on the breed, I’ve seen ducklings take more than twice as long to grow insulating feathers than chickens, and geese seem to take even longer than that. That means they need heat for longer than chickens.

The heating problem is compounded by the next largest source of consternation for anyone who raises ducks: they are some of the messiest creatures on the planet, and it takes less than a week for you to learn why they’re called waterfowl.

Ducks and geese naturally love water and they want to spend as much time splashing around inside of it as they physically can. This presents two major problems: it’s easy for young waterfowl to become soaked, catch a chill and die, and the water gets everywhere, soaking their bedding and fouling a fresh box in just a few hours. Because of the large water intake and the birds’ larger size, they also defecate considerably more than chickens.

There are few smells worse in this world than mats of duck poo baking beneath a heat lamp.

I’ve discovered two direct solutions for this problem. The first is frequent brooder cleanings and transferring juvenile birds to their outdoor coop as soon as they’re feathered. The second is to place their water on an elevated block seated over wire mesh with a drain pan below it, which, admittedly, I’ve only had limited success with.

Indirect option No. 3, and my personal favorite, is to let Mother Nature do the heavy lifting and allow birds to raise birds. Ducks make for phenomenal mothers with generally high success rates in raising babies to adulthood, but this option isn’t always possible for people rearing waterfowl for the first time. Geese are capable parents as well, but they are extremely protective and can be very aggressive toward anything that isn’t related to them so long as they’re raising goslings.

Unfortunately, waterfowl tend to be quite messy even into adulthood, but as their living space grows from a small brooder to a larger space like a coop or a shed, the mess becomes easier to clean with larger tools like shovels and muck rakes. While it’s still revolting, it makes for phenomenal fertilizer once properly composted. 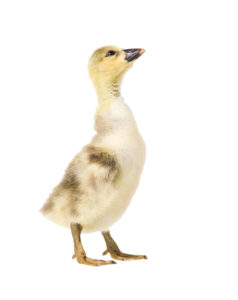 Socializing ducklings and goslings at a young age is considerably different from socializing baby chicks. Ducks are fearful prey animals and are easily startled by just about anything, and especially by being picked up. In my own experience, picking up ducklings has led to frightful and traumatized adult ducks, which made cleaning out brooders a taxing affair. Eventually, I started setting up dividers in the brooder and bribing my ducklings to one side of the box with treats so I could clean out the other side without disturbing them, which has so far led to more sociable birds.

Geese have a more refined and socially complicated existence. While they follow many similar patterns as ducks — not enjoying being picked up, in particular — they also display unique greetings and behaviors. They are regal and gregarious creatures that act as the head of a flock of waterfowl, as well as its protectors. They will perform an almost ritualistic greeting to a familiar human and grow agitated if the human acts in a manner out of the ordinary or doesn’t acknowledge their greeting. Geese have a bad reputation for being aggressive, and while I have personally raised a few that became hopelessly aggressive, much of this behavior comes early in the spring during breeding season, when they become protective of their eggs and goslings, and fades a few weeks later. Raising a friendly and sociable goose seems to be equal parts luck and care.

I hope you enjoyed learning something from a brief gander at this article, but if you’ll excuse me, I’m going to duck out.