You thought you could get rid of me that easily? Ha! I’m back.

While I wish I could say my sudden and unexpected departure was something cool like a soul-searching transcontinental adventure, I have just been working my gluteus maximus off. That being said, I’ve managed to see some really cool landmarks during my time away, including the subject of today’s article. 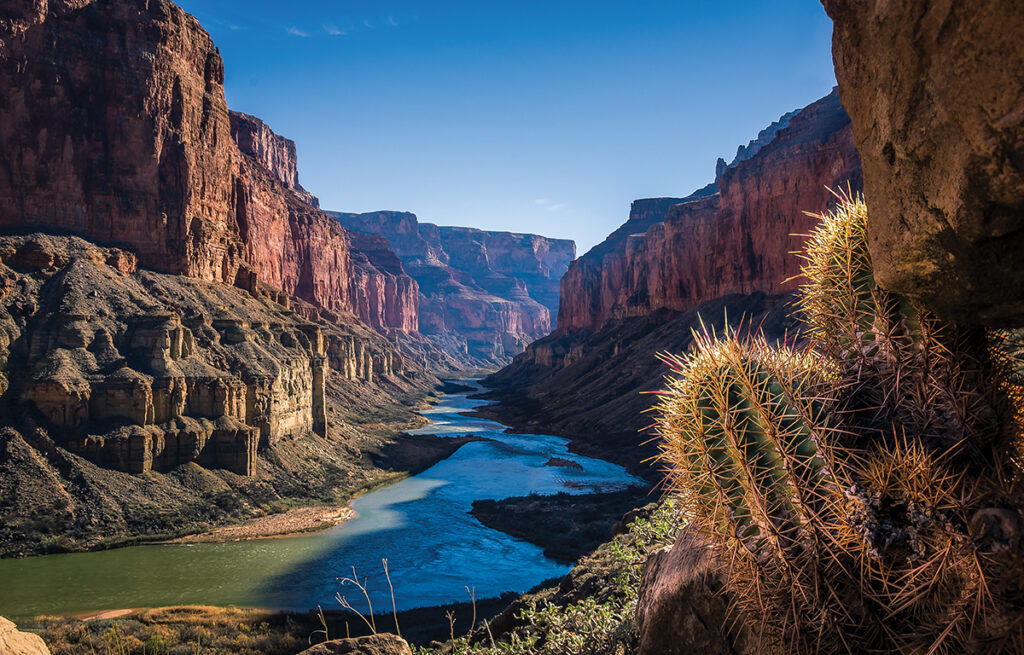 A view from the floor of the Grand Canyon. Courtesy photo.

The Grand Canyon is located in northern Arizona, a little more than six hours north of Phoenix by car. It is an impressive testament to the unrivaled erosive power of water, having been carved away by the Colorado River during the course of the past 6 million years, though the true age of the Grand Canyon could be closer to 70 million years old — 5 million years before a meteorite exploded over what is now the Yucatan peninsula in Mexico.

That’s right: If you had been standing at the site of the Grand Canyon 65 million years ago, you likely would have seen the meteor that wiped out the dinosaurs, and then been incinerated by a superheated shockwave.

It’s incredible to think of how much earth water can move over a very long period of time. The Grand Canyon is 6,093 feet deep — just more than a mile vertically. It is 277 miles long and between four and 18 miles wide, depending on where you are standing. The true scope of this awesome landmark is difficult to truly appreciate when viewing it from the ground. It’s not until you’re flying above it that you can really take in just how immensely huge it is, how much land has been washed downstream and just how tiny we are in comparison.

Yet looking at pictures of the Grand Canyon or seeing it from the air still doesn’t express some of the most unique things about it: its climate. Surrounded by desert, you would believe the canyon to be hot all of the time, but due to the nature of its shape and the water flowing through it, it creates its own weather with notable temperature changes depending on where in the canyon you are standing. One section could be scorching under a setting sun while everything around you is frigid and cloaked in shadow.

It is because of these crazy and unique weather patterns that very few animals seem to thrive in the canyon. Fish, in particular, need to be acclimated to temperatures that can spike into the triple digits and fall below freezing in the same day. Of the eight species of fish that live in the Grand Canyon, six are found only in the Colorado River.

Speaking of fauna unique to the Grand Canyon, the pink rattlesnake is found only in the canyon, and blends perfectly into the surrounding rock.

Aside from being what is essentially a big, long hole in the ground, the Grand Canyon acts as an open history book for geologists. The banded layers of rock act like the rings in a tree, showing the age of the Earth, in addition to a number of major geological events that happened throughout the planet’s history, such as volcanic eruptions, asteroid strikes, blooms and extinctions of life and more.

If this concept is a little difficult to wrap your head around, I can’t blame you. We’re talking about billions of years of major events and slow-moving rock. Humans have only been lighting fires for about 2 million years, and we’ve been writing down the fact that we light fires for a considerably shorter time than that.

Think of it this way: Every day, you put a little bit of pudding into a cup and seal it. The first day is vanilla, the second day is butterscotch, the third day is chocolate and the fourth day you feel like this is a waste of time so you drop some sprinkles into the mix. If it’s all of equal density, your pudding cup should have neat layers showing exactly when and how you added these flavors. The Earth does the same thing, but with giant plumes of ash and carpets of animal carcasses. Once you cut the rocky tiramisu, voila: you have a snapshot of Earth’s history in an easy-to-read chart. Normally, cutting chunks of rock without compromising these layers is really difficult, but in the case of the Grand Canyon, the Colorado River did all of the cutting for us.

There is one curious and unique caveat in this terrestrial tiramisu, and it’s that more than 900 million years of rock are completely missing from the Grand Canyon. There is a band of rock that has been dated to be 1.2 billion years old, with another band that’s about 200 million years old butted right up against it.

If it were a sandwich, it’d be like if you had a 1.2 billion year old heel of bread and a fresher, 200 million year old slice of bread on top: the meat, cheese and veggies are all missing!

Scientists don’t really have an explanation for this. Perhaps the area had been struck by some kind of asteroid or washed away during glacial floods, similar to the ones that carved out Lake Pend Oreille, but there doesn’t seem to be any evidence of that.

Unless one of you dear readers is building a time machine, we may never have an answer for this Grand Canyon mystery.

I missed all of you folks, and I’m glad to be home.