Newly-installed Idaho Lt. Gov. Janice McGeachin is under fire for posing in a photo with conservative activists making hand gestures that some interpret to be a white-supremacist signal. 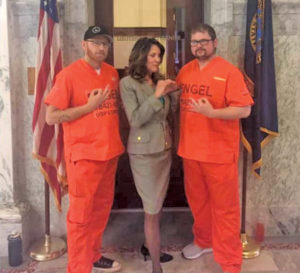 Posted to social media last Thursday, the photo portrayed McGeachin, forming a heart symbol with her hands, with two men wearing orange jumpsuits and making the “OK” symbol. It’s a gesture commonly used by white supremacists, with the three extended fingers forming a W for “white” and the circular thumb and forefinger a P for “power.” But supporters of McGeachin and the pictured men, Anthony Dephue and James Ward, say the hand gestures are completely benign, with the two men instead signaling their support for the Three Percenter organization.

Dephue and Ward wore orange jumpsuits to protest the federal imprisonment of Todd Engel, who was prosecuted for his involvement with the Cliven Bundy standoff in Nevada. Shortly after the uproar began, the post was removed, and McGeachin said that people were falsely attributing a “sinister motive” to it.

“The photo was intended to show support for Engel and nothing more,” McGeachin wrote in a statement. “No other messages were intended in this photo. To claim otherwise is ridiculous, and is part of a larger narrative to paint conservative leaders as embracing identity politics.”

The photo attracted national attention, with media outlets and organizations condemning McGeachin for a perceived friendliness with an extremist right-wing element.

“I discussed the issue with the Lt. Governor. All of us must be accountable for our actions and their implications, and I trust her to do the same,” he said.