The Scotchman Peaks Wilderness issue is reaching a climax after not just a few decades of debate, but rather almost a century of a familiar American narrative: to preserve, or not to preserve?

Of course, these terms aren’t always used as the narrative develops. Supporters of a wilderness designation see it as “protecting,” while the opposition see it as “taking away.” That narrative echoes the voices of Americans who were instrumental in creating the systems now in place — people like John Muir, or Gifford Pinchot. 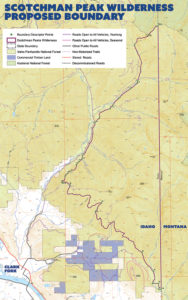 USFS map created at the request of Sen. Jim Risch in 2016. Courtesy USFS.

The Scotchman Peaks advisory vote will reflect the county’s stance on this singular issue, but what brought us here?

The first preservation of a wild place was in 1872, when President Ulysses S. Grant signed an act that made two million acres of northwest Wyoming into Yellowstone National Park. According to historian Roderick Frazier Nash, who wrote “Wilderness and the American Mind” in 1967, the national parks system paved the way for other types of land designation and gave legislative teeth to arguments for saving places so they’d remain in their primitive form.

Fast forward to the 1890s, when the concept of “forest reserves” created a new type of federal land designation. The National Forest system was originally established to remove some forest lands from public domain. At the time, President Benjamin Harrison deemed more than 13 million acres in the United States as national forests, but what that designation meant at the time was debated. While Nash writes that preservationists like Muir saw no difference between the national parks legislation and the national forests, Pinchot and like-minded foresters saw it as an opportunity for selective timberland management. When national forests ultimately established a purpose — to be enjoyed by the public but sustainably managed under supervision of the federal government — Muir continued on his quest for a true wilderness preservation system.

Though Muir died in 1914, his legacy produced the act that preserved land in its most primitive state and promised to keep it that way.

Historian and writer Adam Sowards said that while the final vote in the House of Representatives was 374-1 in support of the act, one must take into account the eight years and more than 60 drafts of the bill it took to reach its final form. During those eight years many compromises were made, and the end result was bipartisan support.

So why has the narrative surrounding new wilderness proposals — like Scotchman Peaks — become so hostile? Some argue the peaks are not “untrammeled,” as the act describes wilderness.

Sowards, a professor at the University of Idaho who specializes in environmental history, said “untrammeled” is a flexible concept that allows protection over places with signs of human activity, like logging, mining or disused roads.

He said Howard Zahniser, who wrote the Wilderness Act, heard activist Polly Dyer use it to describe the Pacific Ocean in Olympic National Park.

“Zahniser liked it better than words like ‘pristine’ or ‘untouched,’ because he knew wilderness wasn’t untouched,” Sowards said. “But untrammeled means something else. It means unconfined. So, untrammeled places are areas where nature dominates.”

An account from 1899 of the Scotchman area’s rugged domination can be found in “Notes of a packer in the Idaho-Montana line survey,” an article in a 1985 issue of Geologists and Ideas. Ross R. Brattain details surveying the Idaho-Montana border and coming up to the Scotchman Peaks, “which is somewhere near one-mile-and-a-half high. Worse than that, when approaching its base it went alongside a cliff that scared two axe men off the job.”

However, Scotchman since Brattain’s account has seen a fair share of use and management. From the early 20th century designation of the Idaho Panhandle National Forests until the 1970s, areas surrounding the peaks saw new roads, logging, mining and other multiple-use operations.

The first official action taken to put Scotchman Peaks on the wilderness track happened in 1987 with the establishment of the first IPNF Forest Plan. This came after several years of Roadless Area Review and Evaluation (RARE) studies by the Forest Service in the 1970s, and led to an official USFS Scotchman Peaks wilderness recommendation.

The 1987 Forest Plan reads that opposition to the recommendation came from those concerned about possible mineral and timber resources in the area. The report also notes minimal snowmobile use on the northern boundary.

That minimal snowmobile use grew with technology, and resulted in increased motorized uses — including snowbiking — in the recommended wilderness. The years following the 1987 Forest Plan made way for the writing of a revised version, which the USFS is required to do every 15-20 years, ­  this time with these technological advancements in mind. The 2015 IPNF Forest Plan recommended the Scotchman area as wilderness, and starting that year, the USFS began prohibiting motorized and mechanized uses in the recommended wilderness during all seasons so that the area would maintain wilderness characteristics and therefore qualify for possible designation.

Sen. Jim Risch introduced the Scotchman Peaks Wilderness Act of 2016 on Dec. 8, 2016, to encompass nearly 14,000 acres. It was read twice then referred to the Committee on Energy and Natural Resources. Risch’s office has, in the time since, hosted a number of open houses to collect public comment on the proposal. He recently announced that the May 15 advisory vote, recommended by the current Board of Bonner County Commissioners, will inform his decision to either reintroduce or abandon the proposal of Scotchman as wilderness.

Management restrictions since the 2015 Forest Plan have given rise to increasingly vocal community opposition. The Idaho Legislature has expressed disdain for such management in the form of House Joint Memorial 14, which tells Congress they “oppose any … further designations of wilderness in the State of Idaho without the approval of the United States Congress and the Idaho Legislature.” HJM 14 is not officially a response to the Scotchman proposal, but rather a general statement from the legislature regarding all of Idaho.

The Scotchman Peaks wilderness proposal is but a microcosm in America’s saga of managing wild places, but it reflects the complexities of the century-old concept.