It’s one thing to have a great idea that becomes a hit on Kickstarter. But what happens when you have to pitch that idea to the big wigs?

JD Claridge experienced exactly that when he and business partner Charles Manning appeared on the popular TV show “Shark Tank” to talk up their Sandpoint-based drone company xCraft. Their challenge: persuading wealthy, famous business tycoons to invest money in their innovative drone designs.

As far as meetings go, Claridge can’t think of a more intimidating one than his “Shark Tank” experience. The show’s panel of investors, including Barbara Corcoran, Mark Cuban and Lori Greiner, aren’t exactly gentle when an idea doesn’t strike their interest.

On the other hand, an appearance on the show is a huge opportunity. There’s the chance to secure more capital, sure. But “Shark Tank’s” popularity also means millions would learn about xCraft for the first time. It’s no wonder that the TV show receives more than 60,000 applications every year.

“This is the kind of exposure companies pay millions to get,” Claridge said. 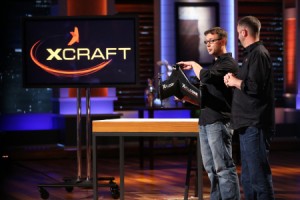 For such a huge opportunity, the “Shark Tank” invitation largely fell into their laps, according to Claridge. In April, he received an email from show representatives. They had watched the company’s Kickstarter campaign for their flagship drone design, the X PlusOne, and were interested in featuring a drone company on the program. Claridge and Manning seized the opportunity, undergoing a lengthy application process, writing out their pitch, shooting an audition video and more.

The entire application process took about six weeks to complete. As show employees worked with them to refine their pitch and collect more information, they cautioned them that they may never tape their pitch. And even if they did, there was no guarantee it would be included in an episode.

Sure enough, however, show producers soon told the duo they’d purchased tickets for them to fly out and tape an episode. Once in the studio, Manning and Claridge went through an extensive process of hair styling and make-up application. They were allowed to wear their own clothes, but the staff blocked off any visible logos. Claridge had to take off his Apple Watch and wrap tape around his shoes.

Finally, it was time for the pitch itself, which Claridge can’t discuss in detail until the show airs this Friday. What he can tell you is how nervous he was.

“It was about 10 times worse doing this in person compared to the times I’ve watched the show,” Claridge said.

It’s hard to blame him. Claridge and Manning had one shot to pull their presentation off. But he also felt well-prepared. Meanwhile, Manning, CEO of Kochava and more accustomed to brokering deals potentially worth millions, took some of the pressure off him.

“He’s been in this world before,” Claridge said. “He was comfortable. I was not.”

Did xCraft’s drones impress the sharks, or did they crash and burn? We won’t know until the episode airs Friday. All Claridge can say is how thankful he was to escape the tank.

“I felt a big sense of relief when it was all done and I hadn’t passed out or anything,” he said.

Either way, the TV show appearance is likely only good news for both xCraft and Sandpoint. The town itself received good publicity from Manning and Claridge’s glowing descriptions to the sharks. Claridge isn’t sure how many of those comments will make the cut, but he’s confident Sandpoint is represented well.

“As far as the long-term goes, I think this will be great for not just us, but the town as well,” Claridge said.

XCraft, meanwhile, will enjoy a huge publicity boost at a critical juncture. For one thing, the company is already selling its flagship drone design, the X PlusOne, in several packages at its website, www.xcraft.io. The drone’s innovative design, which combines the high-speed forward propulsion of a winged drone with the maneuverability and vertical take-offs and landings of a helicopter drone, made it a crowdfunding success on Kickstarter.

Even more critically, “Shark Tank” launches their next Kickstarter project, the PhoneDrone, with a high-publicity introduction. The PhoneDrone circumvents the problem of most drone models—the high cost—by letting a smartphone do the heavy lifitng. Since many people already own a smartphone, which come equipped with GPS systems, accelerometers, gyros, high quality cameras and other sophisticated tech, would-be pilots simply plug in their phone and either program an automated flight plan or control it with a second device.

The upshot is that PhoneDrone sells for a fraction of the X PlusOne’s price: $195 for a limited-supply Kickstarter early bird special, $235 for Kickstarter backers once early bird prices are gone and an expected retail of $295  after the Kickstarter ends.

“[Those smartphone technologies] are really all the expensive equipment that goes into a drone,” said Claridge.

Earlier this year, the PhoneDrone failed to achieve liftoff from an unsuccessful Kickstarter campaign. With the second attempt launching this Friday, the same day the “Shark Tank” episode airs, this second campaign could end much differently.