Since at least early March, the coronavirus pandemic has proved to be a stress test for every aspect of American life — no more so than for the nation’s health care infrastructure and, from the beginning, a paucity of oxygen ventilators has served as a symbol of its fragility.

Owing to the nature of COVID-19, which attacks healthy lung functioning and threatens patients’ ability to breathe, ventilators are seen by front line health providers as a crucial component in their ability to save lives. As The New York Times reported April 14, “For some critically ill patients, a ventilator may be the only real hope.” 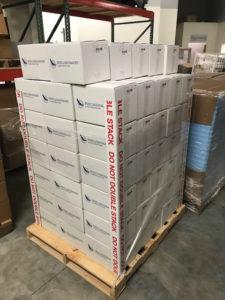 A pallet of ventilators recently manufactured by Percussionaire. Courtesy photo.

Yet, the United States’ supply of ventilators is so woefully inadequate for the crisis that President Donald Trump announced a massive ventilator loan program April 14, enlisting top health care systems and manufacturers for a rapid deployment of the devices. Health care systems have been asked to lend unused ventilators to hospitals in under-supplied hot spots. Meanwhile private industry is set to produce 30,000 of the devices by the end of May, and as many as 150,000 by the end of the year.

Among the companies contributing to the manufacturing effort is Sandpoint-based Percussionaire Corporation, which even before Trump announced the loan program had already jumped to ramp up production of its TXP 5 emergency ventilator. According to an April 12 post on the company’s Facebook page, Percussionaire had surpassed the output of Ford, General Motors and Tesla, with employees working overtime — including on Easter — to build capacity for thousands of devices per month.

“We are getting reports that our high frequency percussive ventilators (HFPV) are helping both the sickest patients and also helping to keep less severe cases off invasive ventilation,” Percussionaire Sales Manager Giles Wilson told the Sandpoint Reader in an email.

Already, those ventilators are shipping to almost every state, with the TXP 5 emergency ventilator prized for its ease of use and ability to be stored for long periods with no batteries to fail or service needs. 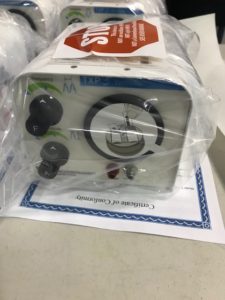 “Percussionaire has a 30-year history of making devices that benefit patients from the most severe ARDS [acute respiratory distress syndrome] through those with chronic conditions that lead to hospitalizations,” Wilson wrote.

While the number of COVID-19 patients being treated with ventilators — or intubated — has slowed since March, it is still increasing by 21 people per day. According to The Times, the need for the devices remains urgent, but some nurses and doctors are now employing non-mechanical methods such as proning, which involves rolling a patient on their side or positioning them on their belly atop a mattress designed for use during pregnancy.

Those methods have proved successful so far, but it’s anyone’s guess whether the relative decline in intubations since March will hold as cases of COVID-19 surpassed 2 million worldwide on April 15, according to Johns Hopkins University.

“We will continue to build this TXP 5 emergency ventilator for as long as needed, as well as our core products,” Wilson wrote.