The acclaimed Sandpoint trio talks about music, the blues and how they came up with that strange name

For the Sandpoint band Browne Salmon Truck, spontaneity is key. For Drew Browne, Samantha Carston and Truck Mills – get the name now? – everything from how they met to how they named their band comes down to going with the flow.

“When I first moved back from Hawaii, I read in the paper that there was an open blues jam at Eichardt’s,” said Carston. “I walked down there and tugged on their shirts and asked if I could sing ‘Love Me Like a Man’ by Bonnie Raitt in the Key of E, one-four-five. I didn’t have a clue what one-four-five meant, I just heard my dad say it once.” 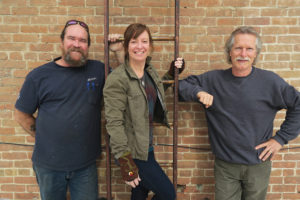 What started as a pickup jam session eventually evolved into something more. Carston, who used to work at Schweitzer, said she was occasionally asked to sing on the mountain for various events: “Whenever I got approached, I went to Truck because I knew him – he’s my go-to guy. Easy to get along with and super talented.”

Another frequent jammer on Monday Night Blues Jam was Drew Browne on bass. Originally from Folsom, Calif. (“The town, not the prison,” he clarified), Browne moved to Sandpoint about 10 years ago and met Mills through a mutual acquaintance.

“I was living in Bonners Ferry at the time working as a barber,” said Browne. “I came down and met Truck, he ended up hiring me for a gig, then I met Sam at Monday Night. Truck’s really the catalyst. The Monday Night Blues thing is a huge network of players.”

“It’s a watering hole,” said Mills. “I’ve been doing it 23 years, and it goes through phases that are determined by who shows up. It’s always a mix, always loose.”

Gradually, the trio found themselves playing together more and more. When they booked a gig at Schweitzer and were told they had to think up a name for the poster, Browne blurted out their moniker, which incorporates a piece of each of their names.

Each member of the trio brings a different style to the final product.

Carston grew up in a musical family; her father has sung and played in bands all his life. She said her first love was for the blues, especially vibrant singers like Bonnie Raitt.

“Then, when I moved to Hawaii, I met a guy who did jazz,” she said. “It’s really cool to throw other types of music in there.”

“Samantha interacts with us as instrumentalists would,” said Mills. “Really great singers aren’t always hip to improv as much as we are, but Samantha, even though she’s not playing an instrument, nine times out of ten she’s directing traffic.”

“She knows when to come back to the one and follow the changes,” said Drew. “She understands music.” 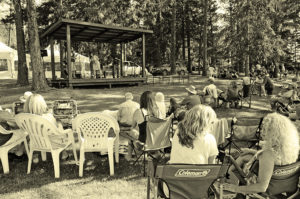 Browne, who works at Quest, brings 43 years of experience to the table. While he started with trumpet in marching and jazz bands, he eventually found himself drawn to the bass.

“I like to express myself musically,” said Browne, who often breaks into intricate, driving bass solos during live performances.

Truck Mills is a household name for live music in Sandpoint. For the better part of 23 years, Mills has played just about every venue in town, and is acclaimed for his blues guitar prowess.

“I started playing in Sandpoint pretty much the day I arrived,” he said. “I went down to Charley Packard’s open mic night at Bugatti’s in 1993. I came here without a job and looked for any kind of work.”

While Mills is best known for his blues guitar, he originally began with a more folky style. It wasn’t until he was exposed to country blues that his head began “spinning around in circles.”

For Mills, playing with Browne Salmon Truck is a nice break from playing front man in his other projects, which include a solo act and a blues trio.

“Fifteen years ago, when I met Carl Rey, he called me up and said, ‘Why don’t you come play with us?’” said Mills. “That was my first real side man job. It was a tight arrangement, but it was pretty loose, too. That was the part I really liked about it – being the side man. After gigging a few months, I realized my joy of this band is to be the side man.”

While the band mostly focuses on an eclectic mix of blues, jazz and old standards, they are delving into the world of songwriting in their characteristic spontaneous manner. Browne and Carston recently joined forces to write their first original as a band.

“I gave Samantha an idea and some contrast,” said Browne. “She wrote some brilliant words with a really cool way to go from the bridge to the chorus. The music just came out one day while I was playing my upright (bass). The riff came and I said, ‘Oh, this is a song.’”

Browne Salmon Truck will be debuting in Spokane during the Fall Folk Festival on Sunday, Nov. 12 and are slated to play the 219 Lounge on Thursday, Dec. 30, but keep an eye on the events calendar for gigs popping up before that.

Until then, Browne suggests everyone close their eyes: “Picture a truck,” he said. “A brown truck, with a giant salmon draped in the bed of the truck. It’s a Browne Salmon Truck. That’s us.”