If you like the festivities surrounding the Fourth of July, thank the Sandpoint Lions Club. For more than a half century, this local philanthropic organization has made it their mission to help those in need, as well as helping our community celebrate our nation’s independence with a parade and fireworks show. 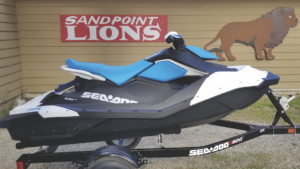 This year, the Lions say the fireworks show will be one for the record books.

“We had phenomenal feedback from last year, saying it was the best fireworks show they’d ever seen,” said Janice Rader, Sandpoint Lions Club vice president and head of publicity. “We increased our budget this year, so it should be a really amazing show.”

The annual fireworks show at Sandpoint City Beach is funded each year by the Sandpoint Lions Club raffle. Usually, the raffle is for an ATV or side-by-side, but this year they’re changing things up and raffling off a 2019 Seadoo worth over $7,000 with a trailer.

Tickets will be on sale Mondays at Yokes, Tuesdays at Co-Op, Wednesdays at Walmart, Thursdays at Super 1, Fridays at Yokes, Saturdays at Walmart and Sunday at the Hoot Owl. Volunteers are usually selling from 9 a.m.-5 p.m. They will also be selling tickets during the Independence Day Parade, and later on the Fourth at Sandpoint City Beach, with winning tickets drawn right before the fireworks.

The second place prize will win $2,000 in Bonner County bucks, while third place takes home a cool $1,000 in cash.

The Fourth of July will kick off with a Kids’ Parade at 9 a.m. in downtown Sandpoint, followed by the Grand Parade at 10 a.m. Those running floats in the parade will register and pick up their number in the Bizarre Bazaar parking lot at Fifth Avenue and Church Street. Applications are available by emailing [email protected]

Radar said the Lions chose the theme “Volunteering in Bonner County” to honor all of the wonderful men and women who give back to their community.

“Without all of our volunteers, we wouldn’t have a Lions Club,” Rader said. “It’s such an important part of giving back to our community.”

Grand marshals will be three women who have given outstanding volunteer service in Bonner County: Marsella Nelson, Joyce Spiller and Cindy Chenault.

The parade will be followed by fireworks at dusk at the Sandpoint City Beach.