Celebrate the local brewery’s 13th anniversary on Aug. 25 at their taproom

It’s been 13 years since Laughing Dog Brewing got its start in a garage, and since then the happy canine face that graces the company’s cans has seen substantial local expansion, distribution in 14 states and garnered several awards. 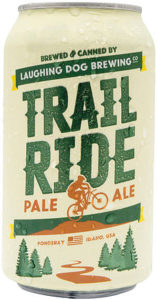 Brewery co-owner Lewis Patrick said all that growth has led to a better-than-ever product.

“We strive for excellence and continue to grow every single day,” he said. “With our newest move, we have been able to implement new processes, add equipment and hire brewers that have made Laughing Dog the best it has ever been.”

Celebrate Laughing Dog’s 13th anniversary on Saturday, Aug. 25 at the brewery’s taproom at 805 Schweitzer Plaza Drive from 12-8 p.m. Patrick said the shindig includes a food truck, music from Melissa Forrette from 4-6 p.m., and the tapping of a special 13th anniversary beer at noon. He said there will also be surprise beers on tap and giveaways throughout the day.

To learn more about Laughing Dog and to look up places their brews are sold, visit www.laughingdogbrewing.com. Find Clearwater Gear insulated growlers, glass growlers, pint and taster glasses along with t-shirts and hats at both the taproom and on the brewery’s website, and find an up-to-the-minute list of what’s on tap at www.untappd.com.

“We offer something for everyone in the taproom, from our award-winning beers to our Summer Hefeweizen, a nice cab, chilled chardonnay, hard ciders and seltzers,” Patrick said.