“An Inconvenient Sequel,” conveniently in Sandpoint

A decade ago, “An Inconvenient Truth” brought climate change a pop culture recognition it hadn’t yet experienced. Now, Al Gore is back — grayer and more determined — to make people across the globe consider renewable energy not just an option, but the only option. The sequel, “An Inconvenient Sequel: Truth to Power,” will show at the Panida Theater four times in the coming days.

The trailer for “An Inconvenient Sequel” is nothing short of a rallying cry. In a review for The Berkshire Edge, Dana Drugmand writes, “former vice president Al Gore is back at it, relentlessly raising awareness of the existential crisis that is global warming. It’s a cause he’s been working on for decades, and his frustration — even a sense of personal failure — is clearly expressed through this film.” 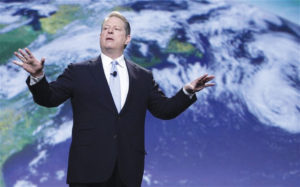 Al Gore gives a presentation during “An Inconvenient Sequel: Truth to Power.” Photo from YouTube.

The new film focuses on Gore’s recent attempts to unite the world in saving itself, showing him giving a lecture to young people one moment and then in waders with municipal officials from Miami Beach, Fla., the next. The climax of the film follows Gore as he works to get India on board at the Paris conference on climate change. The Atlantic’s Robinson Meyer said Gore’s tryst with India might serve as a learning moment for Americans who see the film.

“India’s environmental minister lectures Gore that his country has the same right as the United States to cheap, oil-spurred industrialization,” Meyer said. “This movie is admirably open about how skeptically (the Indian) government sees renewable-energy-spurred development. Americans who assume the rest of the world is in lockstep on sensible climate policy may be surprised.”

Many reviewers say that while “An Inconvenient Truth” came at an opportune time in the battle to educate Americans about the climate crisis, “An Inconvenient Sequel” comes at a time when the environmental documentary scene is a little more saturated. Regardless, the sequel makes it clear that Gore — and countless others — know that “this is our home,” and they want to change policy to keep it that way.

“An Inconvenient Sequel” will show four times: Thursday at 7:30 p.m., Friday at 5:30 p.m. and both Saturday and Sunday at 3:30 p.m. Tickets are available online and at the door, and doors open a half hour before the movie each day.