Call them strange bedfellows if you want, but wilderness preservation nonprofit Friends of Scotchman Peaks Wilderness and timber industry member Idaho Forest Group are ready to seek common cause together. 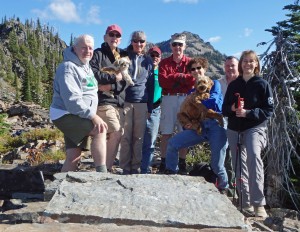 A group of supporters pose at the top of a group hike last Saturday. Photo by Phil Hough.

Monday marked a new course for both organizations with Idaho Forest Group announcing its support of establishing the Scotchman Peaks as wilderness. Although they represent organizations that have historically been at cross purposes, Friends Director Phil Hough and IFG Vice President of Government Affairs and Strategic Outreach Bob Boeh believe they can accomplish more by cooperating than feuding.

“We may have fought a lot, but neither side was getting what it wanted,” Boeh said.

According to Boeh, the process of obtaining Idaho Forest Group’s support for the potential wilderness designation was a gradual one. It helped that the conservation organization took pains to secure formal support from a huge swath of community members, politicians, media outlets, businesses and other nonprofits. Particularly convincing was the support of the Bonner County Commissioners in March.

“I think this is a great blueprint for how these wilderness designations should be done,” Boeh said.

Idaho Forest Group is also willing to offer support in the clear knowledge it won’t impact their business interests. Boeh said the Scotchman Peaks isn’t a tremendously useful region for them due to the unforgiving geography, and it’s clear the wilderness designation won’t impact the overall timber base.

For the Friends of Scotchman Peaks, the support is yet another feather in the cap that will hopefully push Idaho congressmen to introduce legislation in the coming year.

“In many ways, this [support] is an extension of what we’ve been doing already,” Hough said.

As for Idaho Forest Group, its officials are happy to add their voices into an effort that has broad regional support.

“The Scotchmans are cherished by local residents and serve as a tourist draw,” wrote Marc Brinkmeyer, chairman-owner of Idaho Forest Group, to Idaho congressmen. “Recent endorsements … reflect a growing community consensus that the time is right to designate Scotchman Peaks as a wilderness.”