A panoramic shot of the Hope Cemetery. The columnbaria site is out of the frame, down the hill on the right.
Photos by Lyndsie Kiebert.

Leaning on a rake, clad in muddy boots and work clothes, he’s smiling with an overcast but Ross-Hall-worthy view of Lake Pend Oreille behind him.

“I think of these as good places,” he said, looking uphill at the towering trees, lilac bushes and many gravestones of the Hope Cemetery. “Some people look at cemeteries as being depressing, and think about all the memories that got lost or the loves that ended, but I think it just gathers history.”

The rake and muddy work clothes are thanks to the cemetery’s latest improvements, spearheaded by the Friends of Hope Cemetery. Lockwood is the chair of the group. He had just finished filling in the earth behind some concrete poured to mark the place of a columbarium — a structure meant for holding several dozen urns — when he stopped to talk about the project.

The smile may have had something to do with a decades-old idea coming to fruition.

“There are very few burial plots left available, and some are even being used to bury ashes,” he said. “Those very few cemetery plots, once they’re sold, that’s it. So the idea, back when folks were just getting together and they chartered the Friends of Hope Cemetery, was how to secure the future of the cemetery so that it’s a viable, functioning cemetery.”

Those folks — Fran Schuck (Lockwood’s deceased father-in-law), the Rameys, the Dreisbachs, the Butlers, the Dunns, and many more — recognized the shrinking cemetery issue and thus began the brainstorming process. In 2011, the columbaria project was officially announced as “in progess.” Lockwood said the columbaria, which will be tucked up against the downslope of the Hope Cemetery, are just a piece of a larger improvement project.

“There’s enough downslope that my imagination can run wild,” he said. 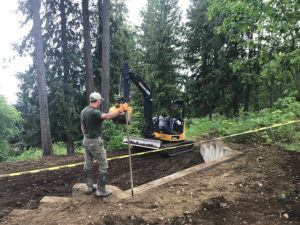 Brent Lockwood, left, and Dennis Hatley, in the backhoe, work on the first columbarium site on May 17.

The first columbarium is located directly downhill from the center of the cemetery. It will hold 48 urn niches with 12-by-12-inch granite plaques acting as identifiers for the deceased.

Beside the first columbarium runs a retaining wall almost two feet tall, which Lockwood calls the memorial plaque wall. He said the same granite plaques will adorn the wall commemorating people who might be buried elsewhere, or families and groups. The wall runs several yards down to the proposed second columbarium location.

“We’re buying (a plaque for) Friends of Hope Cemetery just to recognize our involvement,” he said.

The city council is set to adopt a resolution on June 13 which would make the pricing for the columbarium niches and memorial wall plaques official.

Lockwood said the current price for memorial plaques is $325, plus $150 if engraving is included at the time of purchase, for a total of $475.

The price for a niche during construction is discounted to $925. That price will be available for 120 days or 24 niches, whichever comes first. After that the regular price will be $1,225. In both cases, engraving requests at the time of purchase are an additional $150.

Funds from the columbarium niches will fund future columbaria, Lockwood said, while funds from the memorial wall will go toward the cemetery’s general fund. The cemetery is owned and maintained by the city of Hope.

Applications for purchase can be obtained through the clerk for the city of Hope, Debbie Lazoran, by calling (208) 255-5333.

“When I first moved here and was involved in the project, I couldn’t really visualize it,” said Friends of Hope Cemetery Secretary Susan Howard. “But now that it’s coming to fruition, people are interested. There’s so much potential in this, but until you see it and you feel it, it’s an abstract concept.”

East Hope City Councilman Ian Barrett is one of those interested people. He hails from Canada, where columbaria are popular, so when he found out he could own a niche in Hope he jumped at the chance.

“It’s a great use of the area and it’s a great location,” he said. “It’s a nice way to put your ashes there, and I like the idea of things being in one place.” 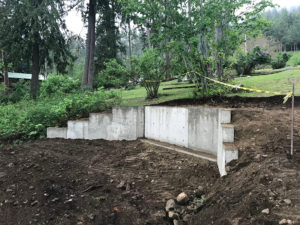 The initial concrete is in place for the first columbarium.

Lockwood said it’s exciting — and a little scary — to see all the groundwork and collaboration turn into actual construction.

When asked whether he thought the improvement project — from the columbariums to the memorial plaque wall and beyond — would ever be finished, Lockwood smiled again, took a look at the concrete shells of what’s to come and then over his shoulder at the view.

“I hope not,” he said. “You’re just trying to create the infrastructure for a living thing that will go on for who knows how long. It’s a living thing — in a cemetery.”

Questions about the project may be directed to me Brent Lockwood, chair of Friends of Hope Cemetery, at [email protected] or by calling (208) 290-6892.