Why haven’t you heard of Kaniksu Health Services?

Nearly 25,000 people in Bonner and Boundary counties — half of the population — receive healthcare from Kaniksu Health Services. The healthcare provider has facilities in Bonners Ferry, Ponderay, Priest River and Sandpoint. Put simply, Kaniksu is everywhere.

This begs the question: Why don’t most people know who they are?

Chief Operating and Financial Officer Kevin Knepper will be the first to admit that he and other people who make up Kaniksu haven’t been incredibly active when it comes to talking themselves up as a resource, despite their undeniable popularity as a health care provider. “Our mission is to take care of everyone who presents themselves,” Knepper said. “Private practices don’t lend themselves well to that. They aren’t set up to make a living seeing uninsured patients. They have to keep a large insurance base.”

While Kaniksu is a federally-qualified community health center, only 13 percent of their funds come from federal funding, Knepper said.

One reason Kaniksu isn’t a huge name in the area, despite their booming patient base, is the patient base itself. Knepper said 80 percent of Kaniksu’s patients are considered “needy” by the federal government.

“They’re not the people with wealth and influence in our community,” Knepper said. “People with influence are largely unaware or misinformed (about Kaniksu).”

Getting in front of those influential people will be instrumental for Kaniksu to continue growing and serving the underserved in North Idaho, Knepper said. Director of Community Relations Olivia Morlen said that while Kaniksu does some public outreach already, they hope to increase their appearances in the near future. 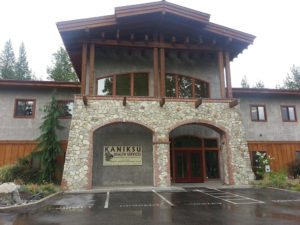 The exterior of Kaniksu Health Services at 30410 Hwy 200 in Ponderay.

“We are looking for speaking opportunities, and other ways to get in front of the people making decisions,” she said. “We want to help create a full picture of our place in the healthcare of the community.”

While Kaniksu, and community health centers in general, have missions to help people with little to no insurance coverage, Peggy Frye said her three children — who are fully insured — have gone to Kaniksu since the care provider adopted Sandpoint Pediatrics in January 2015.

“The (Kaniksu) doctor was able to take off right where (Sandpoint Pediatrics) left off,” Frye said. “That transition over was nice.”

Frye said she’s had nothing but great experiences with Kaniksu, and that she’s excited to see the community health center continue to serve people of all economic backgrounds across Bonner and Boundary counties.

“In my experiences and opinion, they’re easy to get an appointment with — they can get you in quick,” Frye said. “They have the ability to use the sliding scale fees for folks that maybe aren’t covered appropriately, and I think that’s a huge benefit to the community. They have that hole covered.”

Frye echoed Knepper and Morlen’s sentiment that while Kaniksu is well used by the community, it isn’t so well understood.

“There’s a lot of misconceptions about what Kaniksu is,” Frye said. “It’s not just for those low income folks. It is a family medical home and they welcome everyone in the community.”