Hanging up the rollers after 33 years

The interior house paint of the year in 1987 was called “barely-there pink.” The color of the year for 2019 was known as “blueprint,” advertised as a mid-tone that’s “warmer than denim and softer than navy.” 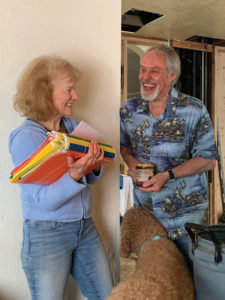 Harold and Liz Stephenson share a smile with their dog Sadie during the renovation of their home next door to The Paint Bucket. Courtesy photo.

While color schemes and styles have changed over the past three decades, Harold and Liz Stephenson have remained the experts that local builders and homeowners rely on at The Paint Bucket. After a long and successful run, the duo decided to retire at the end of January to begin the next phase of their lives.

The Stephensons got into the paint business “by accident” as Harold tells it.

“Liz’s folks started The Paint Bucket in 1972,” Harold said. “It was known as Wright’s Paint back then.”

Liz’s parents later sold their successful business to new owners, who ended up closing the store a few years later.

“Months later, we thought about buying the old paint store from them,” Harold said. “We’re not sure why we did it. It seemed like something interesting to do at the time. It’s a job that’s ongoing — people need paint.”

Liz grew up in Sandpoint while Harold is a Bonners Ferry native. At the time, Harold was working at Safeway and Liz was a stay-at-home mom raising the couple’s four children.

Harold quit his job — leaving behind security and benefits — and he and Liz embarked on a colorful 33-year career that has given them a chance to get involved in their customers’ lives.

Over the years, The Paint Bucket has helped with all aspects of home decorating and renovation — not just selling paint. The business has provided all the supplies needed for interior and exterior painting, answered decorating questions, picked color schemes and helped with other elements of design.

“We’ve even been asked to pick out what kind of rocks they should put in front of their house,” Harold said. “Because we’ve been helpful with paint, some people figure we should be helpful with every other aspect of their lives.”

The first store was located at 204 Main St., where the current Tomlinson Sotheby’s office is located. The Stephensons moved to the current location at 714 Pine St. and built the building in 1991.

“That’s why we’ve stuck with it for so long,” Harold said. “Our customers become our friends. We help them with their houses, their kids’ houses. We develop a close relationship with our customers and they become basically our family. We have people that come in and visit with us all the time. That’s going to be the biggest transition for us — not seeing the people we see everyday. They’ve sure made it fun.”

The Stephensons stepped away from The Paint Bucket on Jan. 27, exactly 33 years to the day from when they first opened. They’ve seen many ups and downs in those three decades, including the explosion of box stores, a recession and an ever-changing building market in Sandpoint.

Harold remembers when Walmart first moved to the area and how many people panicked that it would be hard on mom-and-pop businesses like theirs.

“But it’s the personal relationship that makes the difference between success and failure,” he said. “When the recession hit, it affected sales, but at the same time, homeowners fixed up their houses because they weren’t going to sell, so that kind of evened everything out.”

Justin Schuck, whose construction business Idagon Homes regularly works with The Paint Bucket, remembers working at the shop before he was one of their customers.

“I actually worked for Harold and Liz when I was 16,” Schuck said. “I worked in trade for them letting me use their 1969 Mach 1 Ford Mustang so I could take Lisa Chaiet to the prom. To this day I’ve been trying to buy that car from him.”

Schuck said he prefers to work with The Paint Bucket not just because they are locally owned and operated, but because of their expertise.

“They know what they’re doing,” Schuck said. “They deliver materials on time. Liz is great with colors, what works, what doesn’t. … When you’ve got local customer service like that, with someone who knows the industry, you realize they’re not just trying to sell you something. They really care.”

The new owners of The Paint Bucket are from Coeur d’Alene, where they operate a Benjamin Moore store in Hayden Lake. While the Stephensons have stepped away from the business, they’ll be right next store working on renovations of the former Pine Street Bakery house, which they purchased in 1991 and have since rented out to a number of businesses.

“We’ll keep a hand in whatever they need help with,” Harold said. “We’ll spend some time in the store running them through how everything works. We want them to be every bit as successful as we have been.”

The mural on the outside of The Paint Bucket’s building always helped to identify it as a unique place.

“Maria Larson did the last one, but Nan Cooper used to help Maria with them,” Harold said. “We try to make the store a happy place. We have kids coming in and yelling and screaming that they want to go to the paint store because we put a kids’ room in there. Sometimes when the parents are done, they have to drag the kids out.”

The new owners will continue the tradition of working alongside their family pets, which Harold and Liz did well before it was in vogue to bring your pets to work.

“We always had dogs in the store,” Harold said. “A lot of other stores in town started doing the same. We have grown-up people who run into us at the grocery store and say they still remember the pug we had in the store when they were a kid. Where did all the years go?”

The Stephensons are hosting an open house on Friday, Feb. 21 from 5-7 p.m. at the Sandpoint Community Hall to thank all of their customers for their friendship and support over 33 years.