Half a century of craftsmanship

It’s been 50 years since Sandpoint experienced its first Arts and Crafts Fair, and 43 since the Pend Oreille Arts Council adopted the event. Records show that before it became the POAC Arts and Crafts Fair, the event was known as the The Gay Nineties Arts Festival and featured themes — “The Emerald City of Oz” in 1979, for instance — as well as demonstrations, music, theater performances, community dinners, child care and square dancing, in addition to the chance for local artists to share their wares. 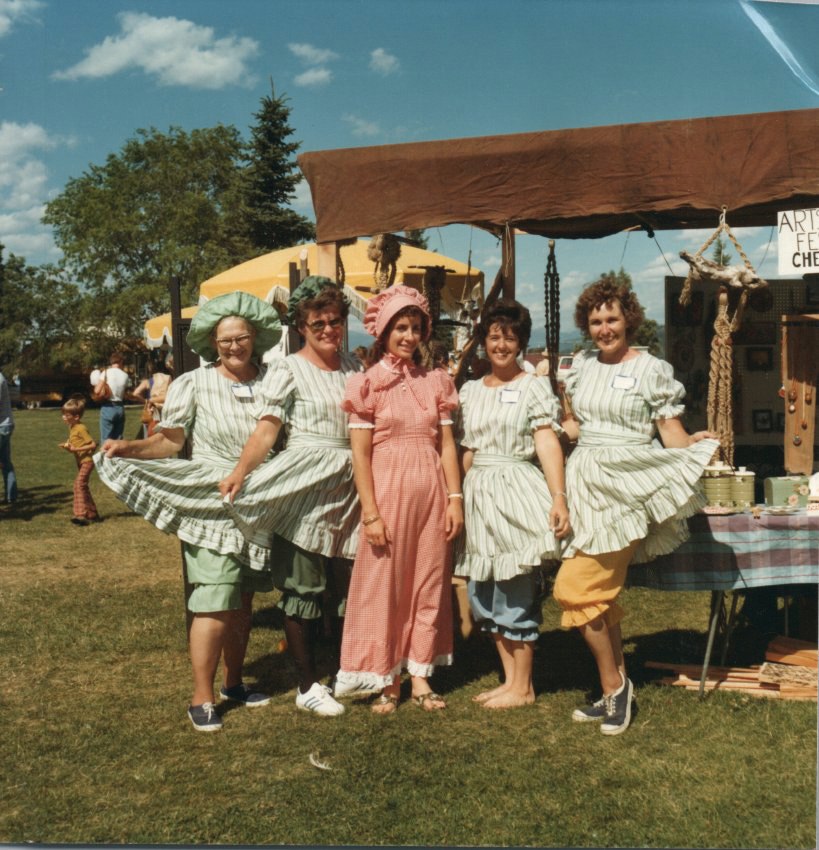 ive Sandpoint ladies dress up for “The Gay Nineties Arts Festival” held at the Sandpoint City Beach c. 1979, which was the predecessor of the Arts and Crafts Fair. Photo courtesy Bonner County History Museum.

According to a brochure from that first POAC-run fair in 1979: “The Pend Oreille Arts Council was established in May of 1978 by a group of local residents who were interested in stimulating the development of arts in Bonner County. As a non-profit organization, the group is dedicated to promoting all phases of artistic endeavors as well as providing support and aid to local artisans.”

Five decades may have passed, but the mission remains largely the same. POAC has continued to stimulate the arts, in part with the continuation of the Arts and Crafts Fair this year, when artist booths will populate downtown Sandpoint on Saturday, Aug. 13 from 9 a.m.-5 p.m. and Sunday, Aug. 14 from 9 a.m.-4 p.m. There will be more than 100 vendors selling jewelry, paintings, ceramics, photography, home goods and more.

While the fair used to be held at City Beach, it now takes place on Main Street east of Farmin Park all the way to First Avenue, and across Second Avenue from Cedar to Church streets. These areas will be reserved for the event starting at 5 p.m. on Friday, Aug. 12, so plan your downtown parking accordingly.

“Moving the event downtown came with its challenges, but I think in the end it was a good move,” said POAC Arts Coordinator Claire Christy. “On Saturday, the fair and the farmers’ market crowds blend together, creating a profitable weekend for so many local artisans. Being downtown makes the fair more handicap accessible, and it is easier to access electricity for food vendors.”

Christy called the new location a ”win-win” for downtown shoppers and beach-goers alike, adding: “The traffic at the beach made it a difficult weekend for beachgoers and boaters to access the lake. With it being downtown, visitors can stroll the fair and purchase their wares, and then take a dip in the lake without excessive crowds.”

One way the fair has not changed, however, is the caliber of craftsmanship required in order for an artist to be featured. The 1979 fair brochure reads: “Any work which does not embody good principles of design, originality and craftsmanship cannot be accepted. Handmade crafts only, no commercially mass-produced items will be allowed.”

“This aspect has not changed, nor will it,” Christy said. “We are dedicated to supporting artists who are in the fair to share their passions. I do my very best to weed out vendors who are buy/sell vendors. If someone suspects that commercially produced items have made it through the jury process, I ask them to bring it to my attention.”

Unlike at similar events, Christy said vendors at the POAC Arts and Crafts Fair keep 100% of their profits, and the diversity of media and style guarantees that visitors will be exposed to art they’ve never had the chance to enjoy.

“As someone who grew up here, I can say that this fair has left me with lasting memories,” she added. “My grandmother would bring me every year and we loved meeting the vendors, grabbing lunch and ‘oohing’ and ‘ahhing’ over art that we had never experienced before. If we can accomplish that with visitors today, we are fulfilling our mission at POAC.”

To learn more about the event and see a complete list of vendors and booth numbers, visit the POAC website at artinsandpoint.org/arts-crafts-fair. The POAC office can be reached at 208-263-6139.