Is gun culture different in rural versus urban areas?

Far more often than not, range master Cliff Lanning is happy to see people with a gun in their hands. 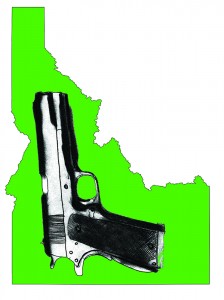 The individuals he helps at the city of Sandpoint’s gun range usually represent gun owners at their best: responsible, mindful and disciplined. What’s more, gun ownership adds to their quality of life. They hunt for enjoyment and to reduce their food bills. They participate in sports shooting and target practice. They even enjoy family bonding through hunting trips or events like  “take your daughter to the range” day. Introduced three years ago, Lanning said the event now brings more than 100 people together to shoot some .22 rounds.

“[People at the range] are pretty respectful,” Lanning said. “They know if they’re kicked out, they won’t be allowed to come back.”

Following the San Bernardino shooting that killed 14 people last week, gun control measures are once again the subject of national conversation. What these debates often fail to take into account, however, are the cultural differences in urban and rural populations. It’s a factor that hinges on one question: Is a gun a tool for recreation and hunting or a weapon?

The answer for some locals is likely, “A little of both.” But there’s no question that perceptions of firearms differ between urban and rural populations.

According to FBI statistics, Idaho ranks eighth in the nation for highest rates of gun ownership, with 56.8 percent of households owning at least one gun. With so many guns in the state, police officers inevitably see their share of them. Sandpoint Police Chief Corey Coon and Ponderay Police Chief Mike Hutter say their officers aren’t surprised, for instance, when they pull a vehicle over and spot a rifle or a shotgun in the back. It’s certainly not the cause for alarm that it might be in New York City or Los Angeles.

“I think it’s something every officer we hire understands comes with the territory,” Coon said.

Despite the proliferation of guns, Coon and Hutter said local gun violence is rare. While they didn’t have exact numbers, they figured it averaged on one incident or so per year, usually cases of drug-related violence. For comparison, the Spokane Regional Health District recorded 2,971 deaths from gun violence from 2007 to 2011 in the city of 210,000. On average, there were more deaths from firearms in Spokane County than deaths from motor vehicle crashes.

However, small towns may not be entirely immune from gun-related deaths. According to a 2010 Reuters article, studies indicate gun-related accidents and suicides in rural areas line almost exactly with gun-related homicides in cities: about four deaths per 100,0000 children and teens.

Gallup polls compiled by USA Today in 2013 show that rural Americans are twice as likely to own guns and, critically, six times as likely to hunt. This has a marked impact on cultural views toward firearms in rural areas. Youth in small towns are more likely to undergo hunter safety training or other gun safety classes. That familiarity means rural residents tend to be more comfortable with guns.

This invariably leads to different perspectives in the wake of mass shootings like the San Bernardino massacre. For instance, some news coverage characterized the 2,000 9-mm handgun rounds and 2,500 .223-caliber rounds as “an arsenal.” Lanning disagrees with that assessment.

“Most of the guys I know have that in their houses all the time,” he said.

“I come from a rural state,” Sanders argued. “And the views on gun control are different in rural states than they are in urban states whether we like it or not.”

Small town views on guns and gun control may differ from the city, but they aren’t ubiquitous. Over the past several years, local gun owners have been divided over existing gun control measures like Idaho’s concealed carry permit requirements. Idaho law requires permit holders to demonstrate familiarity with guns through classes or other training. On the other hand, hard-line conservatives, including Rep. Heather Scott, R-Blanchard, favor allowing Idahoans to carry concealed weapons without a permit. That’s a proposal that gives Lanning pause.

“I don’t think that’s necessarily right, because you’ll get a whole lot of people who have no idea what they’re doing with a gun,” he said.

It’s unlikely the debate over gun control will end any time soon. But local hunting and sportsman traditions aren’t going anywhere, either. If any solution exists to the problem of gun violence in America, it will likely need to address the difference in rural and urban attitudes. That’s a rift politicians  will find difficult to bridge, as President Barack Obama acknowledged in a 2013 speech.

“Sometimes we’re so divided between rural and urban, and folks whose hunting is part of their lives and folks whose only experience with guns is street crime,” he said. “And the two sides just talk past one another.”

Idaho residents can often be more familiar with guns than some, but that’s no cause to forget some basic gun safety tips.

•Sandpoint Police Chief Corey Coon and Ponderay Police Chief Mike Hutter urge residents to record their firearms’ make, model and serial number. This is essential information for police in the event of a gun theft.

“Without a serial number, it’s next to impossible to recover a stolen gun,” Hutter said.

•Keep your guns locked away, and if you have children, don’t tell them where the key is located. For households with children, this is a common-sense safety practice to prevent accidental injury or death. According to Coon, it also reduced the likelihood of gun theft. Reducing gun theft is doubly important, since stolen firearms are more likely to be used in violent crime, Coon said.

•When handling a gun, always remember the three basic rules of gun safety: Always keep the gun pointed in a safe direction, always keep your finger off the trigger until ready to fire and always leave a gun unloaded until you’re ready to use it.

•Make sure your guns are cleaned and maintained according to manufacturer specifications.