The SHS Chamber Choir’s quartet looks to fundraise, but mostly they just really like to sing

Ben Robinson, Ryan Baumgartner, Burton Anderson and Riley Anderson are juniors at Sandpoint High School. They lead different lives, whether as athletes, play actors or student council members. They all aspire to study different topics in college, from musical theater to engineering to economics. 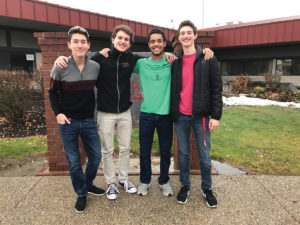 But Robinson, Baumgartner, Burton and Riley are also a bass, a baritone, a tenor and a lead, respectively. Together, they make up the Sandpoint Chamber Choir’s quartet, and together is exactly how they’ve been since they all joined men’s choir their freshman year.

The four students sing in the SHS choir under teacher Jon Brownell. Robinson said while the choir used to always have a quartet, they hadn’t for a couple of years until this year, when he asked Brownell if he could bring it back.

“We approached our director and said ‘This is what we’re going to do and we hope you support us and back us,’” Robinson said. “I thought we had a good group of guys to make it happen this year.”

Brownell gave them the OK, and thus began the rehearsing, tweaking and learning that comes with creating music with four voices.

“They just love to do what they are doing,” Brownell said. “Most of the time, I don’t even need to motivate them to rehearse. They do it even if I’m not there.”

Forming the quartet also created a unique fundraising opportunity for the SHS choir as a whole. While the entire choir will go out and perform at the local restaurants on the weekends in order to bring in donations, having a smaller group of singers who could approach locals on weeknights meant the choir would have more chances to raise money for trip they hope to take this summer, Robinson said.

That trip, part of a program called Festivals at Sea, is an opportunity for the SHS Chamber Choir — made up of 43 students — to take a cruise boat from Florida to the Bahamas while performing for nationally renowned music educators.

Brownell said he has had a number of his current students for six years, and that he’s proud of the work they’ve put in so far.

“They deserve this last little memory for all of their hard work and diligence over the years,” he said. “They are a very talented and respectful group of young adults.”

Last Thursday, while singing at Trinity, the quartet approached the right table at the right time: Andy Hackbarth, a singer-songwriter who was performing at the Panida that night, heard the boys sing and then asked them if they’d like to share the stage with him for a song later that evening.

They said yes, and after singing “The Longest Time” by Billy Joel, the Panida’s audience applauded the quartet and reached for their pocketbooks. The boys all agreed that it was an unexpected and awesome experience.

“The most important thing about us is that we’re a tight group of great friends, and we love what we do,” Robinson said.

Anyone interested in helping send the quartet and the rest of the choir to Festivals at Sea can make checks out to the SHS Chamber Choir, or keep their eyes peeled while eating out in Sandpoint in case the quartet pops in to sing a few tunes and accept donations.