Idaho’s longest-serving governor, Democrat and unflagging outdoorsman and wilderness advocate Cecil Andrus died Thursday after a battle with cancer. He was 85. 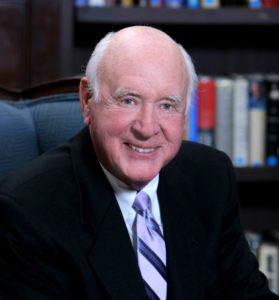 “Governor Andrus was a dynamic and effective leader who knew how to wield authority and get things done for Idaho, and for the nation,” Sen. Mike Crapo said in a statement. “His leadership and sense of purpose as a public servant were demonstrated repeatedly during his long career in public service. He earned my respect, and I count him as a friend. He will be forever remembered as a leader of great accomplishment. I send my heartfelt sympathies to his family as they, along with Idaho, mourn his passing.”

Andrus died at home, the day before his 86th birthday, with his family.

Andrus was a member of the Democratic Party and served as governor of Idaho for 14 years; from 1971 to 1977, and again from 1987 to 1995. He also served in Washington as U.S. Secreteary of the Interior during the Carter Administration.

“Governor Andrus was an inspiration to me,” wrote Idaho Democratic Party Chairman Bert Marley in a statement. “As a candidate and a legislator, he was always available for advice and support. He was the honorary chairman of my campaign when I ran for Superintendent of Public Instruction and was someone who I could always turn to. Governor Andrus was continually supportive of the work we did to try to improve the lives of all Idahoans.”

The career path of Andrus is unique in Idaho, a predominently red state. When first elected to governor in 1970, he was the first Democrat elected Idaho governor in 24 years. Andrus’ tenure as governor saw 24 years of Democratic control of the governorship that ended in 1995 with Republican Phil Batt’s election. With Gov. C.L. “Butch” Otter’s retirement next year after three terms in office, Idaho will have been under GOP control for another 24 years.

Andrus is survived by his wife of 68 years Carol, and by daughters Tana, Tracy and Kelly, as well as grandchildren Monica, Morgan and Andrew and great-granddaughter Casey.