Follies more than just ‘prancing on the stage’

This is in response to Diane Wheeler’s “Point/Counterpoint” article in the Jan. 18 issue of the Reader. 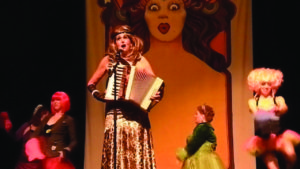 First I want to say that I respect Mrs. Wheeler’s opinion — after all, Sandpoint is a typical American community in that it is populated by people from many different cultures, faiths and lifestyles. And so this letter is not a condemnation of Wheeler’s beliefs or opinions but rather a rebuttal of several points she raises in her article.

First her statement regarding “the followers of Bacchus from far away are welcomed with open arms, while the dignified members of the community are discouraged from attending.” I don’t know how long Wheeler has been in the area, but I have attended several years of the Follies as a cast member and as a member of the audience. I can say firsthand that the vast majority of the people attending are in fact local. And for those “followers of Bacchus” who are not, they are filling up the hotel rooms, condo rentals, restaurants and pubs. They are shopping in Sandpoint’s downtown shops — things that are badly needed in a resort town such as ours that depends on these people from “far away” to stay in business and earn a living.

I also take issue with the implication that the local people who attend the Follies are not “dignified members of the community,” when in fact most of them are our neighbors, the people we deal with each and every day in business. To imply that a person is not “dignified” simply because Wheeler deems the event to be inappropriate feels a bit like: “If you don’t believe as I do you are not acceptable.” That sounds like bigotry to me.

Second, there is Wheeler’s assertion regarding underage teens taking part in the Follies. Perhaps she could clarify when and where this occurred. As I said before, my involvement in this event goes back several years, and while I cannot speak to what happened before I became involved, I can safely say this is not the case today. We all wear wrist bands and IDs are checked, even mine at the age of 61! In fact, there have been several acts in the past few years who have been told to tone things down, and I can say that I have never “pranced across the stage in my underwear.”

Third,  there is Wheeler’s reference to one of the main participants who said she “would dance naked in the street if it would help feed the poor.” Although I believe the person said this, it was said in jest. It only strengthens the insinuation  if you don’t believe as Wheeler does, you are not an acceptable person. I know the person who said this personally, and I can state that she has put in more hours on behalf of this community than anyone I know. She has been a productive member of this community for far longer than me and is very devoted to her family.

Finally, as to Wheeler’s assertion that she hopes the curtain will come down and prays that the next charitable enterprise will edify our culture, I ask: whose culture? Yours and no one else’s? Also, as a person who has had many years of experience in fundraising for nonprofits, I can truly say that fundraising is a very hard thing to do. I ran a successful concert series for a nonprofit for many years, and if we raised $4,000 to $5,000, it was a very good night. Each year the Follies raises on average around $25,000 and has raised I believe more than $30,000 in some years.

I am not aware of many fundraisers capable of raising this kind of money. As a person who remembers what it is like to be poor — who passed out in an English class as a student because I had not eaten for several days — I am grateful that the Angels have put the time and energy into an event that does so much for this little town. If there is one kid who benefits from this and does not have to pass out from lack of food, then yes, this event is worth it and so much more.

I will close in saying this: I appreciate Wheeler’s right to have her opinion, even if it is an opinion I do not agree with. After all, respect starts in a person’s own heart. Perhaps if Wheeler feels there is a better charitable enterprise that can be as successful as the Follies, she can get involved with the Angels and propose an alternative. Maybe  she can roll up her sleeves and do what it takes to make it a success. It would seem that everybody would benefit from this, and I am sure the Angels would welcome another form of fundraising to help out our needy citizens. In the meantime, given the fact that there are many decent (dignified) people in this community who treasure the Follies — and it is completely a choice as to whether or not a person attends or not — perhaps just don’t buy a ticket and leave it at that.

Patrice Webb is a local musician and a “dignified member of the community of Sandpoint.”