Under pressure from Gov. C.L. “Butch” Otter, Idaho Fish and Game Commissioner Blake Fischer resigned in response to outrage over a photo of him posing with a group of dead baboons. 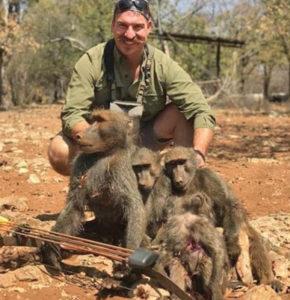 Idaho Fish and Game Commissioner Blake Fischer poses with a “family of baboons,” which includes an apparent juvenile. This photo and others were released to the public after Fischer emailed them to dozens of recipients. Photo Facebook.

The photo, taken during an African hunting trip last month, portrays Fischer posing with four bloodied baboons killed with a bow and arrows. The photo was originally among a dozen from the hunting trip shared via email, but when the it was leaked to news outlets, Fischer faced heated backlash. According to Otter, the resignation was an important step to maintain Idaho’s standards for ethical hunting and to preserve the state’s reputation as a destination for sportsmen and women.

“I have high expectations and standards for every appointee in state government,” said Otter in a written statement. “Every member of my administration is expected to exercise good judgment. Commissioner Fischer did not. Accordingly, I have accepted his resignation from the Idaho Fish and Game Commission.”

The photos generated criticism from individuals across the country following national news coverage of the incident. Some reacted to the graphic nature of the images, which included an apparently juvenile baboon among the killed animals. Other hunters and Fish and Game commissioners criticized Fischer for not demonstrating the hunting ethics and decorum that agency leaders are expected to champion.

In his resignation email, Fischer himself acknowledged that the photos were an example of poor judgment.

“While these actions were out of character for me, I fully accept responsibility and feel it is best for the citizens of Idaho and sportsmen and women that I resign my post,” he wrote. “I apologize to the hunters and anglers of Idaho who I was appointed to represent and I hope that my actions will not harm the integrity and ethic of the Idaho Fish and Game Department moving forward.”