Electrical hypersensitivity: a disease without a name

The day begins like any other for Krista Hess-Mills and her three children.

Just after 7 a.m., the kids wake up, tie their shoes, and rub the sleep from their eyes. Olive, 13, feeds the pig, while Arthur, 8, fills the dog’s water bowl. Josiah, 11, rides his new bicycle around the yard. 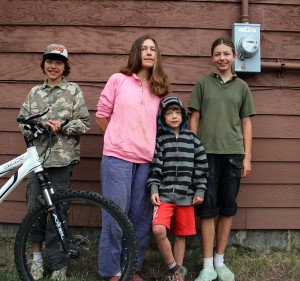 It’s a seemingly normal day except for the fact that this Oldtown family of four did not sleep inside their home, but in a series of tents erected 100 feet from the house and covered with heavy tarpaulins.

According to Hess-Mills, she has chosen to sleep outside every night for the past month because she believes she has electric hypersensitivity (EHS) to electromagnetic fields (EMFs) emitted from a new piece of technology being used more and more by power companies across the world; a two-way “smart” meter.

“I moved in late February of last year,” said Hess-Mills. “But they didn’t put the smart meter on until March of this year, then it was activated in June.”

Hess-Mills said she began to feel the effects about three weeks after the smart meter was activated.

“I started feeling weird,” she said. “I wasn’t able to sleep, and my kids said they couldn’t either. We just had to get out of there. We slept outside and we could actually sleep. Ever since, we haven’t gone back.”

What is a smart meter? Instead of having a meter reader come to your home and write down the numbers, or relying on self-reportage of energy consumption, a smart meter is in two-way communication with the power company.

“Many power companies are moving to digital meters as they provide many efficiencies and better technology for our members and power systems,” said John Francisco, Chief of Energy Resources at Inland Power.

Some of those efficiencies include lower operating costs since power companies no longer need to travel to members’ homes to read the meters, more accuracy and better information for members, who have access to their energy information 24 hours a day to help reduce their usage, conserve energy and save money. Improved power restoration is also included in the list of benefits. 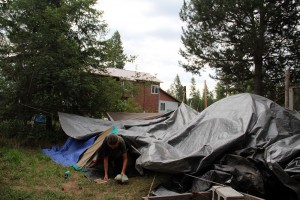 Olive Hess-Mills exits her tent in the morning with the main house in the background. Photo by Ben Olson.

“We can now pinpoint the exact location of outages,” said Francisco. “With our old system, members needed to call in their outage so that we were aware. Our system now alerts us, which means faster response time and ability to locate outages faster.”

The majority of smart meters send information wirelessly, except in rural areas where power lines are used to transmit the data.

It is this pulse surging of EMFs, according to Mary Maio, that has come under fire of late for being a possible health risk. Maio says she has several symptoms of EHS, which has not yet been recognized as a disease.

Fans of the TV show “Better Call Saul” might recognize the malady in Saul Goodman’s brother, Chuck, who wears tinfoil blankets and bans cellphone use from his house.

According to Maio, however, the malady is no laughing matter.

“I have tinnitus, heart palpitations, chest pain and pressure,” said Maio. “I have difficulty concentrating, headaches. I have radio frequency hearing, so I can hear the signal. I can’t even go into Starbucks because I get headaches and start shaking, get dots in my eyes.”

Maio and her husband have been filming a documentary to educate the public on EHS, possibly caused by items like smart meters, cellphones, power transformers, and other items that emit EMFs. 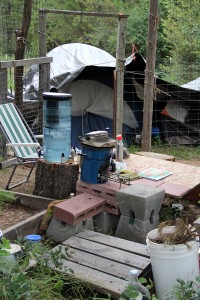 A make-shift table set up near the tent in the yard of the Hess-Mills family. Photo by Ben Olson.

“While we are not experts on [EHS], we have looked extensively to studies done by third parties and none have shown conclusive harm,” said Francisco. “We did pick a system that transmits as little as possible at common frequencies.”

According to Inland Power, their Tantalus meters emit significantly lower radio frequencies than common household items such as microwave ovens and cordless telephones. The RF signal emitted from a cellphone held next to the head, for example, is 12.667 times greater than the signal emitted from a smart meter.

For Dr. Andy Marino of Louisiana State University, it has been his life’s work to show that EMF-induced biological effects are real.

“We are on the periphery of a huge, and essentially insolvable problem,” said Marino. “These people [who have EHS] have a severe problem … when someone has a hypersensitivity to anything, a food for example, a wide range of symptoms are exhibited as the body reacts to alien substance. There is pain in the joints, headaches, twitches of muscles.”

Dr. Marino, who has spent 45 years studying the effects of EMFs on people, got his start working in Dr. Robert Becker’s lab. In 1968, Dr. Becker was the first scientist to give an evidence-based warning of the serious public health consequences that could arise from uncontrolled use of our living space as a conduit for EMFs. He pointed out that electropollution induced currents in the body comparable in strength to those that mediated the body’s natural growth and regulatory systems.

According to Dr. Marino, the tremendous expansion in society’s use of EMFs—via computers, cellphones, WiFi, smart meters and military weapons and communications systems—occurred in the absence of serious inquiry into their impact on the health of the population.

“I’ve been studying the biological effects for over 40 years,” he said. “The focus up until now in regards to health impacts has been a relationship to chronic diseases, mainly cancer. We’re looking at people exposed to electronic fields for a multiple of years and seeing if they have a higher rate of cancer.”

But, Dr. Marino says, progress is slow because of the political structure in the U.S.

“Physicians have no particular time to deal with patients who have these conditions,” said Marino. “When he goes to school, he’s not taught about the existence of the syndrome.”

It is the non-existence of the syndrome, in fact, that makes it hard for people like Maio and Hess-Mills to be taken seriously.

“There are no studies,” said Marino. “Which is probably a good thing, because the only people who would pay for it are the people that make the smart meters.”

As of now, the World Health Organization has concluded that although purported symptoms are real, there is no scientific evidence of a causal link with EMF exposure and that lowering internationally accepted EMF limits is unlikely to reduce the prevalence of symptoms. In short, EHS is not recognized by the scientific community as a disease.

“Most people think I’m making it up,” said Hess-Mills. “I don’t even want to talk with my mom about it anymore, because I don’t really know if she believes it or not.”

Hess-Mills recently requested to Inland Power to exchange the smart meter with one that didn’t have a two-way communication function, which they have agreed to swap out for a fee of $25 per month.

“Inland Power created an opt-out program in response to these concerns,” said Francisco. “We will install a new meter without RF [radio frequency] communications to members.”

Although Hess-Mills isn’t happy about the extra fee, she is glad Inland Power has allowed her to opt-out.

“They should accommodate whatever meter you want,” she said. “You’re the customer. You’re buying the electricity.”

In a recent court case, a judge in California ruled that opt-out fees violated state discrimination laws in a case where a utility company cut off electricity for 14 months for a customer suffering from EHS.

Plumas-Sierra Rural Electric Cooperative (PSREC) terminated Josh Hart’s electricity after he refused to pay an opt-out fee for use of an analog meter instead of a smart meter. Hart and his wife lived without electricity for more than a year, until Plumas County Superior Judge Janet Hilde ordered PSREC to cancel the opt-out fee and monthly charge for reading the analog meter. She also ordered the utility to allow Hart to self-read the device.

For Marino, this is just the beginning of a larger problem, which he has discussed in over 150 scientific papers published over his career.

“Over a long period of time, say 50 to 100 years, there is going to be a dawning awareness that man is an electrical animal,” said Marino. “His life is an electromagnetic phenomenon. Uncontrolled exposure to these EMFs is potentially harmful. Generalized emission levels will be set. I believe the model that happened with cigarettes is going to happen here, but it’s going to take a very long time.”

What advice does Marino have for people who believe they are suffering from EHS?

“The best thing to do would be to consistently follow an elimination-and-challenge strategy while carefully maintaining daily written records regarding all environmental factors that could plausibly account for the symptoms,” said Marino. “EMFs may or may not be a cause, either alone or in combination with other factors that cause stress.”

For Hess-Mills, who expects to have her smart meter exchanged to a non communicative meter soon, she worries that it will not fully solve the problem.

“If it still affects me, I wonder if they’ll put in an analog meter,” said Hess-Mills. “At that point, if they don’t allow that, maybe I just won’t use power at all.”