Science suggests they do

Book in hand, bedside lamp on, dog curled up on my legs — this is my bedtime routine. My nearly 2-year-old border heeler, Mac, forms a tightly-wound ball with her chin propped up on all four of her paws. Her closed eyes and steady breathing tell me she’s done pestering me — or the cat, for that matter — to play, and that a deep sleep is well on its way. 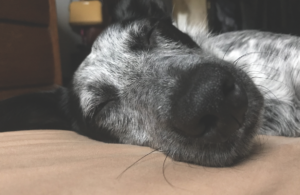 But for Mac, deep sleep isn’t always entirely serene for the people around her. Mac is an avid dreamer.

It usually starts with her breathing becoming shallow and quick, followed by some pretty disturbing facial twitching. Then, her lanky legs launch out from under her, digging for space in a bed already crowded between her, me, the cat and another human. Sometimes these dreams even include whimpering or barely audible growls.

At first I figured it was just my tendency to anthropomorphize my dog getting the best of me, but some research confirms that Mac is, in fact, dreaming — just like humans do.

This research began on brains much less complex than a dog’s: rat brains. The Massachusetts Institute of Technology conducted a study in the early 2000s in which rats were made to navigate a complex maze during the day and at night scientists studied the rats’ brain waves. When the rats reached REM sleep, brain wave patterns were almost impossible to distinguish from the wave recordings taken while the rat was actively searching the maze. The conclusion: the rats were having dreams based on their memories — much like I still have dreams that I forgot to do my math homework and am about to miss the bus.

Rats and humans dream about what they know, and the same goes for dogs. Research shows that a dog’s daily activity is oftentimes exactly what inspires those late-night muscle spasms.

When Mac dreams, I can see her sniffing the many wonderful scents in the hay field where we play fetch every day, flexing her jaw ever so slightly to emulate picking up the ball, her shoulder muscles twitching as she dreams about digging her paws into the grass to run then trotting back to me for another round. When she whimpers, I imagine she is having a nightmare that the cat is picking on her. When she growls, it’s probably the UPS man, who has the audacity to drive his big, scary truck up her driveway.

So, while I am guilty of anthropomorphizing Mac in other aspects of life, it turns out that science is on my side when it comes to my dreaming pup. Maybe next, science will back up my belief that she has excellent taste in music. Only time will tell.