Editor’s Note: Ellen Weissman is running as a Democrat in the primary election for District 1 State Representative, Seat A. 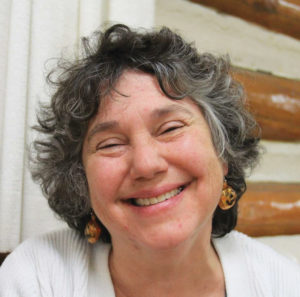 Sandpoint Reader: To begin with, can you tell us a little about why you decided to enter this race?

Ellen Weissman: I’ve always been interested in politics. And I thought that at some point I would run for something. When the Florida shooting happened, that pushed me closer. Much closer. … I’ve several times thought about running for county commissioner, but that position for my district isn’t up this year. Then I found out that the seat (in the Idaho Legislature) currently held by Heather Scott is available, so I decided to put my name in.

SR: What are some of the issues that have driven you to get involved in politics?

EW: I’m concerned about the Rock Creek Mine and think it shouldn’t go through. It’s the same with the smelter issue. You have threats from both the east and the west. And there are plenty of other issues that affect the quality of the environment and the life that we have here, which is why we chose to move here: to have clean air, clean water.

I’m also concerned about education dollars. Idaho is at the bottom of the list for quality of education and teacher pay. We need to improve that. Then there’s the need to have a voice for North Idaho, because I think there are a lot of decisions being made without North Idaho being considered.

SR: What personal qualities to you bring that you think would make you an effective representative?

EW: I was raised right outside Washington, D.C., so I didn’t get local news — I got D.C. news. Dinner table subjects were … about what’s going on in our nation and world. I sat in the chambers of Congress and was influenced by seeing government in action. They were all white men at the time … and we were memorizing the presidents, so I asked my teacher why there were no women presidents. So I think that’s when my (political) beginnings happened.

Ever since then, I’ve been in arenas that involved public relations. I was a teacher and developed listening skills. I’ve worked with people of all ages, from infants to elders now. And I think I can represent people’s viewpoints … and adequately reflect the full spectrum of opinions. We have a diverse place—perhaps not racially, but a diverse collection of viewpoints. I think I can listen well and then take those opinions down to Boise.

SR: Tell us a little about your work as director of Sandpoint Area Seniors, Inc., and how that might influence your work in Boise if elected.

EW: Being a senior is not something people think about until it’s smack dab in their face. When thinking about what’s good for seniors, it’s often something that’s good for everyone, like wheelchair access. Awareness on those kind of things has grown, but there’s always more to do. Also, as director of the senior center, I’m in kind of a neutral position politically. I’m advocating for everyone, and there are no divisions between Democrats and Republicans. It’s about getting adequate care for someone who is dealing with Alzheimer’s. It’s about helping someone who is a veteran get services they need. So we’re an information and referral hub, and we are constantly letting people know what activities and services are around town.

Elders have taught me a lot. Some are in their 90s and still active, so I want to go to Boise and say, “Look, people are living longer.” Ten thousand people a day are turning 65 in our country for the next 19 years. We have to think about how to take care of our elders.

SR: You mentioned the Florida shooting as another motivating issue. What should the state being looking at when it comes to gun violence?

EW: I understand people who want to have guns for hunting or for protection, and I can accept that. But I cannot accept someone who could have gotten treatment for mental health issues and didn’t getting a hold of machine guns and killing kids. Or killing people at a movie theater or grocery store or shooting Gabby Giffords while she’s doing public speaking. These things that are occurring in our country are absurd and crazy. And I think we have to realize that enough is enough. We have to have sensible legislation. I don’t think it’s a question of taking away the Second Amendment. … But there needs to be better regulation over selling and tracking and using weapons.

SR: Your opponent in the primary certainly doesn’t have viewpoints one would expect of a Democratic candidate. Do you have any thoughts on that?

EW: I have not yet met Mr. Vickaryous. I am told that he is very arch-conservative and has jumped over from the Republican side to running on the Democratic ticket. I think that as much as I don’t like the two-party system, it’s in place so people who align themselves on one side or the other will stay on that side. So I’m curious to meet him and find out more about his viewpoints. We have a variety of Republican politicians like Shaun Keough who have done an awesome job, so I’m not crazy about the D or the R at the end of people’s names. But … if you’re way over on the other side, why are you running as a Democrat?

SR: Thanks for talking with us, Ellen. In closing, is there any issue you want to comment on or message you want to get out to voters that we might not have covered?

EW: I’m concerned about Scotchman Peaks as well. I really hope that can be deemed a wilderness area. We are losing public lands right and left in our country. And as a former teacher, I really care about kids. It’s not just wanting them to be safe either, but all people. We need to be concerned about domestic violence. I want people to learn parenting skills and communication skills.

Ellen Weissman AT A GLANCE

PROFESSION: Teaching in the past. I’ve been the Executive Director of Sandpoint Area Seniors, Inc. (“SASi”) aka the Senior and DayBreak Centers the last 3 1/2 years.

FUN FACT: I love to juggle and I have jumped in the Polar Bear Plunge 14 times in the last 20 years!