The next step in the ongoing legal challenge to a proposed asphalt plant in Sagle is in the hands of Second District Court Judge Jeff M. Brudie, who is considering a petition for judicial review brought by opponents of the facility at a Dec. 13 hearing. 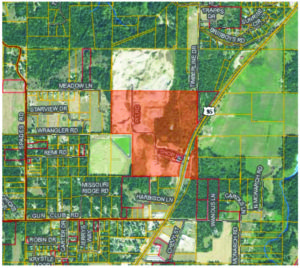 Nonprofit group Citizens Against Linscott/Interstate Asphalt Plant filed the petition after more than a year of decisions and appeals regarding the approval of a conditional use permit by the Bonner County Planning and Zoning Commission and Board of County Commissioners. The permit is meant to allow an asphalt batch plant in a gravel pit owned by Frank Linscott. Interstate Asphalt & Concrete would run the operation.

Brudie, who typically presides in Nez Perce County, heard from legal counsel on both sides during the Dec. 13 hearing at the Bonner County Courthouse, where several members of the Citizens group filled the gallery.

Petitioners argue that the commissioners based their decision on an improperly adopted ordinance to allow asphalt plants in farming and residential zones, and that Linscott has illegally expanded his gravel pit operation over the years without proper permits.

“As Marcellus said in Hamlet, ‘Something is rotten in the state of Denmark,’” said Gary Allen, a Boise lawyer representing the Citizens group, in his opening remarks. “Something is also rotten in Bonner County.”

John Finney, the lawyer representing Linscott, said that guidelines for a batch plant conditional use permit stipulate only that the plant be located in an “active gravel pit.”

Bonner County Deputy Prosecutor Bill Wilson represented the commissioners at the hearing, and said he “took issue with the characterization of the county turning a blind eye” toward any noncompliance on the part of Linscott. He said that to the county’s knowledge, the gravel pit applies as a suitable location for the plant.

“Perhaps  [I will]  not be at the same table as my colleagues next time,” Wilson said, referring to legal counsel for Linscott and Interstate, with whom he was sitting, “but that hasn’t happened yet.”

Brudie will return to the Bonner County Courthouse at a yet to be determined date to deliver his ruling.