Comic Jimmy Shubert to perform at the Hive 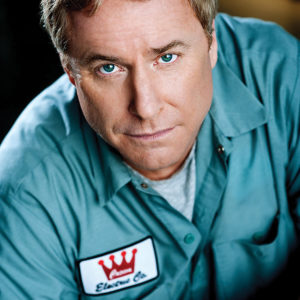 The actor and comedian has an extensive filmography of roles in television and movies built up over a long career. From appearances in popular TV shows like “Entourage” and “The King of Queens” to roles in movies like “The Italian Job” and “Mr. and Mrs. Smith,” Shubert has seen his fair share of time on the big and small screens. Local audiences, on the other hand, have a chance to see him live and in person when he headlines a show this weekend at The Hive.

Shubert is teaming up with Spokane comedian Morgan Preston, who has spent the past couple years building a local following for comedy by bringing in nationally-known comedians to venues like the 219 Lounge. His collaboration with Shubert is the latest in those efforts, and it promises to be a gut-busting time in downtown Sandpoint.

Shubert’s stand-up experience is just as prolific as his filmography. He recorded his first half-hour special for Comedy Central Presents at the Hudson Theater in New York City, earning glowing reviews for his performance. He also has three comedy albums under his belt: “Animal Instincts,” “Pandemonium” and “Alive and Kicking.” He’s entertained U.S. troops with Drew Carey in the Department of Defense and Armed Forces Entertainment’s “America Supports You” program, and he’s toured the world with his comedy, including the United States, China, Honk Kong, Singapore, Canada, Ireland, Mexico and Korea.

With his observational style and short-story format, Shubert keeps his shows brisk and lively. He draws extensively on his native Philly background, his childhood with his six brothers and his experiences being raised by his Philadelphia police detective father.

“It was like having Lieutenant Colombo as a roommate,” Shubert explains. “Most of my childhood was an interrogation scene from ‘Law & Order.’”

Enjoy the laughs for yourself at this 21-and-older comedy show presented by Dig Beats Productions and KPND. It all takes place Saturday, March 30, at The Hive, with doors opening at 7 p.m. and the show starting at 8 p.m. Tickets are $20 in advance or $25 at the door. Get yours at www.livefromthehive.com or locally at Eichardt’s, Pucci’s Pub and at the venue on show day.