This winter could be a good time to be in the north.

The National Oceanic and Atmosphere Administration (NOAA) is predicting that North Idaho will have a colder, wetter winter this season due to a La Niña weather pattern that is likely to develop. 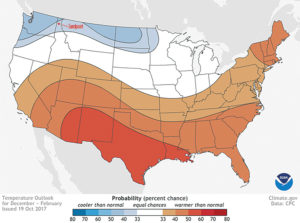 A map of the U.S. showing the temperature outlook for this winter.

A La Niña pattern, according to Mann, is “the abnormal cooling of ocean temperatures near the Equatorial regions.” La Niña changes weather patterns as the Maritime Polar Jet Stream becomes stronger, said Mann.

“Therefore, since we are influenced by that jet stream, we should get more storms and colder temperatures this winter season,” Mann said.

The rest of the country will not fare so well, according to NOAA. The majority of the country — including Hawaii, most of Alaska and the lower two-thirds of the contiguous U.S. — appear to be in for less-than-average precipitation and warmer-than-average temperatures.

If predictions hold true, this would be the third year in a row that the country will face a warmer winter. The Washington Post ranked last year the “sixth-warmest winter on record.” 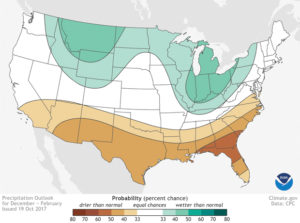 A map of the U.S. highlighting the precipitation outlook. Courtesy of NOAA.

While more precipitation and colder temperatures contribute to an above-average snowpack, Mann said that doesn’t always dictate what type of fire season will follow.