Sandpoint’s aging water system is creating efficiency and infrastructure problems throughout the city. On Wednesday, city officials laid out a plan to address it. 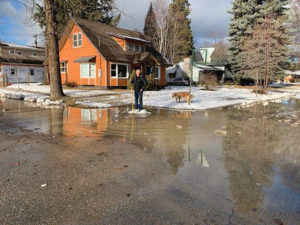 The latest in a series of presentations outlining the planning process for the city’s most pressing projects, the master water plan will identity priorities for system replacement over the coming years with an eye toward financial impacts to the city.

“Nationwide, water infrastructure is graded at a D,” City Engineer Dan Tadic told council members. “Sandpoint is maybe not quite there, but not much better, either.”

According to the presentation, the problems with Sandpoint’s water system are clear. With nearly 97 miles of water transmission mains from 4 to 18 inches in diameter, the city’s water infrastructure is robust but growing unreliable and more expensive to maintain with age. Last year saw nearly four dozen leaks of varying severity, and according to city data, the system is tipping over the industry standard of 5-percent water loss.

According to city officials, it’s clear that action is necessary. But deploying action in an efficient, effective way requires a plan. To that end, the city hired consultant Murraysmith to develop a blueprint for the future.

At the heart of the project are four key goals: identifying replacement priorities for the next 20 years, anticipating costs and impact to future budgets, ensuring sufficient capacity and pressure for projected growth and guaranteeing that regulatory requirements are met.

That’s where Murraysmith comes in. Working with the consultant, the city will assess the existing water system and how it will handle future demand. From there, data from modeling and analysis will be integrated into city systems, which will help the team develop a capital improvements and master plan for the Idaho Department of Environmental Quality to review.